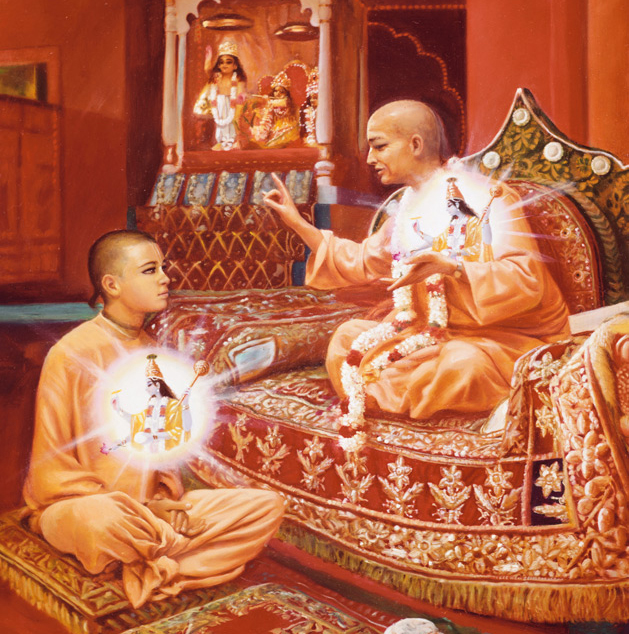 Looking for Guru? Anyone, anywhere, at any time and every time can and should chant the Hare Krishna Maha Mantra:

If you sincerely chant these Divine Names, Krishna Nama Prabhu will be pleased. Nama will purify and qualify you, and then directly reveal your eternal Guru, guide and affectionate serving friend.

What is diksha?
Sri Jiva Goswamipada says, “Diksha means receiving transcendental mantras and knowledge from the qualified teacher or Guru. The word diksha comes from “da”, meaning give divine knowledge, and “kshi” meaning destroy sin. So diksha is the process of receiving divine knowledge from the enlightened master which then destroys the disciples’ sins. To receive diksha, one must surrender at the feet of Sri Guru (means physically submitting oneself before Guru) and offer one’s complete self (mana, tana, dana or mind, life and wealth/talents) to Sri Guru. Then one receives Vaisnava diksha mantras along with the proper procedures.

In other words, at the time of initiation, Sri Guru gives mantras to the disciple which eventually reveal the form, qualities and Vraja madhurya lilas of the disciple’s cherished ista-devata i.e. Radha-Govinda Yugala. In addition, the benevolent Guru teaches the disciple the ways of worship to unfold his/her eternal spiritual identity, seva, and sweet personal loving relationship with Radha and Krishna.

The Independent Power of Diksha Mantras
In Brihad Bhagavatamrita, Sri Sanatana Goswami clearly establishes the phenomenal power of the diksha mantras received from Sri Guru. He narrates how a Vrajavasi cowherd named Gopa-kumara received diksha into the gopal mantra during a brief meeting with a wandering mendicant.

The Guru then immediately disappeared, leaving behind only one instruction: “Chant your diksha mantra constantly!” Just by the power of that diksha mantra Gopa-kumara traveled all over the universe, met many shiksha gurus and eventually attained spiritual perfection in Krishna prema and the spiritual world, Goloka

The Vamana Kalpa shastra says, “The diksha is non different from the Guru and the Guru is again non different from Bhagavan Sri Krishna, mantra sa guruh sakshat, you guruh sa harih svayam.” Therefore those who wish to worship Sri Krishna should receive mantra diksha from a qualified guru.
Sri Chaitanya Mahaprabhu said, “The body of a Vaisnava is never material for it consists of pure transcendental bliss. At the time of diksha, one surrenders to Sri Guru, and Krishna then makes the devotee equal to himself by transforming the devotee’s body into one of spiritual bliss. In this spiritualized body the devotee serves Sri Krishna’s lotus feet. (Cc. 3.4.191-193)

Thus the inconceivable power of diksha mantras, and the absolute necessity of receiving proper diksha is proven to be essential for attaining spiritual perfection in Krishna prema.

Importance of Both Proper Diksha and Shiksha
Some say diksha is not important. And all you need to attain spiritual perfection is shiksha or spiritual instructions, transcendental books, teachings and the chanting of the Hare Krishna Maha Mantra. But actually one needs both proper diksha and proper shastric-based shiksha.

Perfection is impossible without the proper guru diksha parampara connection, correct shastric shiksha and the pure chanting of the Hare Krishna Maha Mantra.
If you accept shiksha and the traditional shastras as your guides, then you must also accept what the shastras and purvacharyas teach about the absolute necessity for receiving proper diksha.

Citing Vishnu Dharma, Sri Jiva Goswamipada further emphasizes the need for diksha in Hari Bhakti Vilasa (298): “Bhagavan Sri Krishna is pleased with one who performs these eight types of bhakti to Sri Krishna, his/her diksha mantra, and the guru who gives the mantra. These eight types of bhakti or devotional expressions are:
1) Showing affection toward devotees;
2) Feeling positive about Krishna worship;
3) Worshiping Krishna daily with a favorable mind;
4) Giving up false pretense to please Sri Krishna;
5) Being attracted to hari-katha;
6) Serving Krishna with body and mind;
7) Always remembering Sri Krishna;
8) Chanting Krishna nama with full dedication.
Anyone, even a degraded meat eater, will become a glorious and truthful sage by observing these eight forms of devotion.”

In his Srimad Bhagavatam (6.2.9-10) tika, Srila Visvanatha Cakravarti explains the necessity of taking mantra diksha from a Vaisnava Guru: “Without a Guru, one cannot attain Bhagavan very easily. Therefore it should be explained that there is no other way of attaining Sri Krishna than by becoming a devotee who has surrendered to the feet of a guru.
[to one who just chants Hare Krishna without guru Visvanatha Cakravarti says] Due to the power of their worship, such a diksha less person will attain a Guru in the next birth.

“What about the example of Ajamila who just chanted Hare Krishna without diksha? So then why take the trouble of accepting a Guru? In response, I (Srila Visvanatha Cakravarti) say that such a person will NOT ATTAIN Krishna because he/she is committing the third nama aparadha of ignoring and disregarding Guru and the Guru principle. However, perhaps later in this life or in a future life when this offense has been destroyed and one surrenders to Sri Guru, then one will attain Bhagavan Sri Krishna.”

Diksha: Living Guru or Audio Recording?
Some argue that since mantras are transcendental vibrations, they exist beyond the limitations of time and space. Thus anyone anywhere at any time can receive diksha mantras just by hearing an audio track or a mobile phone transmission. However, the sastras, purvacharyas and tradition all say that diksha means PHYSICALLY HEARING the diksha mantras in one’s ear directly from the lotus mouth of the living Sri Guru. This is ABSOLUTELY NECESSARY.

In Hari Bhakti Vilasa part two, Sri Sanatana Goswami states that receiving the diksha mantra directly into one’s ear from the mouth of the guru is essential for Vaisnava diksha.

Thus taking a mantra from a book, mobile or audio track is not according to the teachings of Bhagavan Sri Krishna, Sri Chaitanya Mahaprabhu, shastra or Gaudiya Vaisnava tradition.

Is Following Guru Enough?
Sometimes devotees argue that, “My Guru’s word is final and I just follow whatever he says, BAS!” That’s good in principle as long as the Guru is transparent and clearly presenting the correct Gaudiya Vaisnava tattva siddhanta.

You must remember that your Guru also has a Guru who has a Guru and so on all the way up to the samasti guru, jagat-guru Bhagavan Sri Krishna or His Kali-yuga expansions, Chaitanya Mahaprabhu, Sri Nityananda Prabhu Sri Advaita Prabhu, etc.

And Sri Krishna Himself and all His expansions always speak and follow the shastra. Thus shastra, and not the shiksha of one’s immediate diksha guru, is the ultimate spiritual authority, proof and power to base one’s spiritual life upon.

Calling the God of Love
0 replies