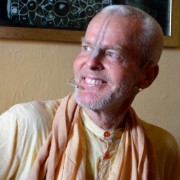 Mahanidhi Swami grew up in New Jersey, the United States near the seaside. He studied medicine at Rutgers University (1969-1973) and moved to Los Angeles, California for further studies. Since becoming a vegetarian at the age of 18, he has studied many spiritual books and met many teachers during his search of a blissful God.

After studying the Bhagavad-gita, Ishopanisad, and the teachings of Chaitanya Mahaprabhu, he understood that life is meant for one thing only: attaining love of God, and the eternal service of Radha–Krishna in the spiritual sky.

In 1975, Srila Prabhupada (founder of Hare Krishna Movement) accepted him as a student, giving the name Mahanidhi Dasa. After ten years of celibacy and preaching Krishna consciousness, he took ISKCON sannyasa in 1985 as Mahanidhi Swami, which is his legal name.

In 1981, Mahanidhi Swami organized and presented ISKCON’s very first Jagannatha Ratha-yatra in Washington D.C., United States, still going on. After serving his Guru in America for 12 years as a Gita and Bhagavata distributor (1975-1981); Ratha Yatra inaugurator; and Baltimore Temple President (1982-1986),  he moved to India in 1987 to live in Sri Vrindavana Dhama.

In 1977, he visited Sri Navadvipa Dhama, Jagannatha Puri Dhama and Sri Vrindavana Dhama. When Swamiji saw Radha-kunda for the first time, he was completely astonished and mystified because that sweet darshana unveiled a hidden memory of a past life there. While sitting peacefully at Manasa Pavana Ghata, where Srimati Radharani daily bathes in Radha-kunda, a prayer and sankalpa spontaneously arose in Swamiji’s heart:

“O Srimati Radharani! I am a no one special, I am just one insignificant jiva. I don’t know how or why I am feeling this way. But I pray to You, O Radharani, please allow me to someday live on the banks of Your most beautiful and peaceful lake of pure love (Sri Radha-kunda), so I can eternally serve You and Your beloved Sri Krishna.”

From 1977 onwards he visited Vrindavana every year until 1986. In 1987, what he calls the “Vrindavana Fever”, or the burning desire to live in permanently in Radha-Krishna’s lovely Vrindavana, totally consumed all other interests and he moved to Sri Dhama Vrindavana.

In 1998, the most kind and compassionate Srimati Radharani blessed him with Indian Citizenship.

From (1989-1992) he served and did bhajan in Srila Prabhupada’s personal rooms (bhajan kutir)in Seva Kunja within the medieval temple of Sri Sri Radha Damodara. In 2002, he moved to Sri Radha Kunda, where he lives within a beautiful forest bower dedicated to Srimati Radharani.

Every year since 1994, during Karttika Month (Oct-Nov), he has glorified Srimati Radharani, Her manjari maidservants, and the wonderful pastimes of Sri Sri Radha-Krishna. Often classes are also given on Sri Chaitanya Mahaprabhu.

Swamiji is always writing books, and articles for the Internet on Radha-Krishna prema seva. Every Sunday (4-7pm) he conducts spiritual programs at his Radha-kunda ashram which are called “Sunday Satsanga”. These spiritual question-answer sessions with a few devotees are sourced from shastras, and sprinkled with a dose of transcendental humor. Immediately the audios are uploaded on SoundCloud and mns.audio.com. with the title, “Sunday Satsang”.

Audio recordings of these classes are available on SoundCloud and mnsaudio.com.