However popular this idea is, it is not found in the sacred texts of India. To know the real facts regarding transcendence, divine personalities, and reality in general one must refer to three different sources of Vedic knowledge i.e. prasthana-traya.

The Upanisads are the crown jewel of the Vedas, eternally existing as the sound incarnation of Bhagavan meant to bring (nishidati) one near (upa) the Absolute Truth. The wisdom of the Upanisads is called rahasya-vidya, secret knowledge, because one realizes it in the heart after receiving it from Sri Guru.

Among the many Puranas (smrti-prasthana), the most comprehensive and authentic source of knowledge regarding Lord Shiva is the Shiva Purana.  Here we will fine the real marriage day of Shiva and the meaning of Shiva Ratri.

After waiting sometime, they suddenly saw an unlimitedly huge stambha (“Jyotira-linga”). Neither Vishnu nor Brahmaji could find the beginning or end of that linga. Then Lord Shiva personally manifested before them, and Vishnu and Brahmaji worshiped Shiva with pancha-upacaras, five puja items.

Feeling joyful with their puja, Shiva said, “I am very pleased by your worship. From now on this day will be called “Shiva Ratri”. I will be fully bless anyone who honors this day by worshiping me.” Thus began the tradition of worshiping Lord Shiva on Shiva Ratri.

Regarding the actual, true marriage date of Srimati Parvati and Lord Shiva, the Shiva Purana says, “They were married in Chaitra month (march-april) shukla trayodashi, which means the 13th day of the waxing moon.

We hope this information will increase everyone’s awareness and understanding of Lord Shiva, who is the best Lord Sri Krishna’s devotees, vaishnavanam yatha shambhuh [Srimad Bhagavatam 12.13.16],  and one of the 12 authorities (mahajanas) of Vaisnava wisdom, svayambhur naradah shambhuh…[Srimad Bhagavatam 6.3.20].

Who Can Wear Tulasi Neckbeads? 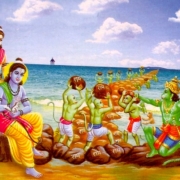 My Nitai Is Lord Rama

Srila Prabhupada Vyas Puja Part II Why Do We Worship the Guru?

The Witch of Hope