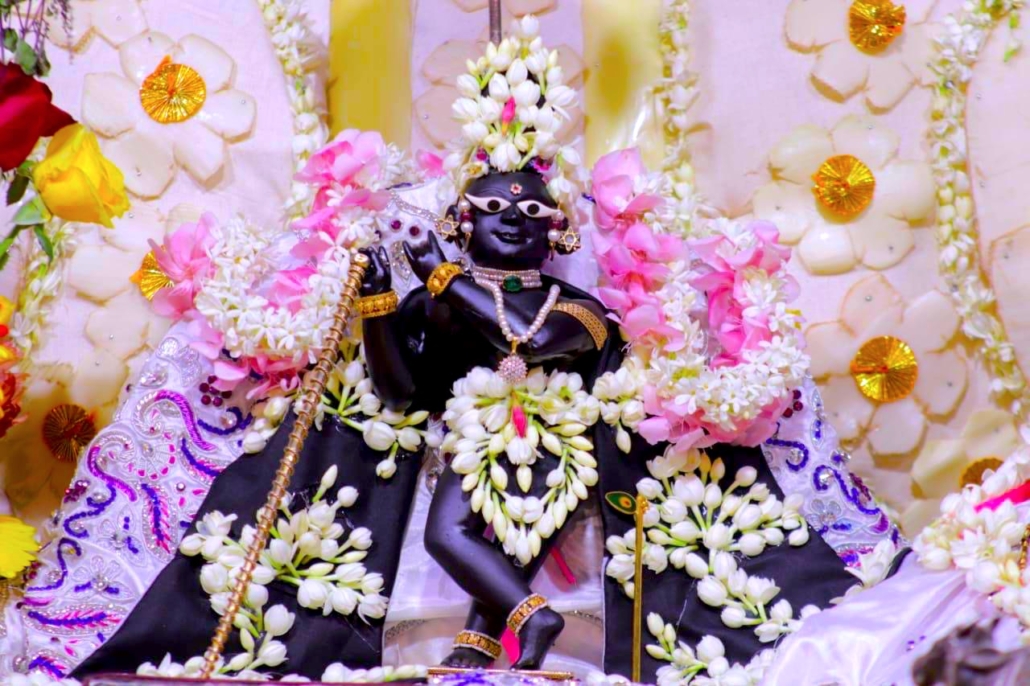 After coming to Vrndavana, Sri Gopala Bhatta Gosvami used to worship eleven salagrama silas. He never had a fixed residence. Carrying His salagrams in a cloth bag, he would wander around Vraja just like Sri Rupa and Sri Sanatana Gosvamis. Once a wealthy man, desiring to serve Gopala Bhatta, gave him some opulent cloth and ornaments.

Gopala Bhatta kept those gifts and thought, “If I had a Deity then I could nicely decorate Him with these things.” That evening after offering bhoga and arati to his salagrama-silas, he put them to rest in a basket. The next morning after returning from his Yamuna bath he started his salagrama puja. He was completely astonished when he woke the Lord, and found a gorgeous Deity of Krsna playing a flute. There were now ten silas and this Deity.

Overwhelmed in spiritual bliss, he fell to the ground and offered dandavats¸avats. Then he recited various stutis and stotras [hymns and prayers]. Sri Rupa, Sanatana, and many other devotees came running when they heard the amazing news. The whole universe became enchanted by the Lord’s beautiful form. Everyone just gazed at the Lord as their tears fell in streams to bathe Him.

The Deity of Sri Radharamana Deva appeared on the full moon day of Vaisakha in the year 1542. Radharamanaji is one of the few original Deities of the Gosvamiss who never left Vrndavana. Radharamana Deva still receives a high standard of worship full of loving attention in His temple beside Nidhuvana in Vrndavana.

Sri Radharamana Deva has a uniquely gorgeous form. He has a smooth and brilliant Syama-blue complexion, a broad chest, long arms, a waist as thin as a lion’s, and powerful sloping thighs. He has many intricate features which include lotus-petal eyes, fingernails and even teeth. Anyone who even once sees His all-attractive threefold bending form will be captivated forever. On the back of Radharamana one can still see parts of the original salagrama sila from which He manifested.

In Goloka Vrndavana, Gopala Bhatta is Sri Radha’s beloved maidservant named Guna Manjari. Let us remember the mind-enchanting Sri Radharamana Deva, and pray for the mercy of Sri Gopala Bhatta Gosvami as we meditate on the following translation of a sucaka kirrtana written by Manohara Dasa.

“Whenever I see the beautiful lotus feet of Sri Gopala Bhatta Prabhu my eyes flood with tears. One becomes free from the cycle of birth and death by hearing about your unlimited qualities. Being attracted by your moonlike face and lips, which are radiant like the rising sun, I am no longer pierced by Cupid’s ten golden arrows. Your beautiful teeth resemble a string of pearls. Your joyful words are saturated with the sweetest nectar.

Sri Rupa and Sanatana, Dasa Raghunatha, Bhatta Raghunatha, Raghava Panditá, Kaviraja Gosvami, and Lokanatha Gosvami are your life. Radharamanaji is your very soul. You offer obeisances to Lord Caitanya with your body overflowing with love. You are like a honeybee attached to His nectarean lotus feet. You so kindly gave shelter to Srinivasa Acarya [his disciple]. Your only activities are relishing rasa, associating with pure devotees, and tasting the divine madness of gopi bhava.”

“The pastimes of Radharamana flow through your mind like the celestial Ganges. You are the crest-jewel of rasika Vaisnavas. By relishing prema rasa you become overwhelmed with ecstatic emotions. Oh, ocean of spontaneous love for Radharamana, you are the friend of the fallen.

“Your fame is sung throughout the universe. Your divine form is sweet to behold and full of mercy. Your unlimited transcendental qualities act like a touchstone. O master, just once let me see your lotus feet, which are the essence of all sweetness.”

“After many many births I have attained the rare fortune of serving the servants of your eternal associates. Due to my bad karma I have simply wasted my life enjoying sense gratification. I am full of offenses. My only hope is that you, who are full of merciful qualities, will deliver this fallen soul. I am greedy and sinful, and although my mind is fickle, still this Manohara Dasa calls out to you: Please don’t neglect me!”