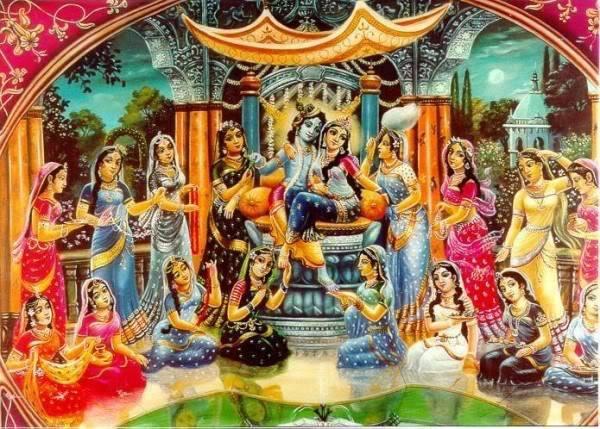 Srila Prabhupada: “Srimati Radharani makes Krishna happy in so many ways with the sixty-four arts i.e. dancing, cooking, making peace, and smiling in many attractive ways.”

The manjaris learn these 64 arts directly from Srimati Radharani and Her sakhis. In the next para, Sri Raghunatha Dasa Goswami mentions a few of the arts that the sadhana siddha manjaris will learn after arriving in Bhauma Vrindavan to serve Sri Sri Radha and Krishna.

Next we will list the basic 64 arts. For the Sanskrit names and more elaborate descriptions, please refer to KRSNA BOOK or our book “Gayatri Mahima Madhuri” (cp. 7 pg. 100-102).

The most amazing point about the 64 arts is that every Gaudiya Vaisnava following Sri Caitanya’s path of raga bhakti, will some beautiful fine day in the future go directly to Radha-Krishna’s Bhauma Vrndavana lila, and then learn all these wonderful skills and talents DIRECTLY FROM SRI RADHA and Her dearest sakhis.

In a divine passage, Sri Raghunatha Dasa Goswami reveals how one day in Varshana, Sri Radha holds a nava dasi’s hand and takes her alone into a cave in Govardhan to personally teach Her own love poem. Later in the nikunja on Radha’s signal (ingite), the fortunate manjari will recite Radha’s prema-filled poem for the ecstatic pleasure of Her Priyatam.

This is definitely the ultimate Guru/Shishya sambandha! 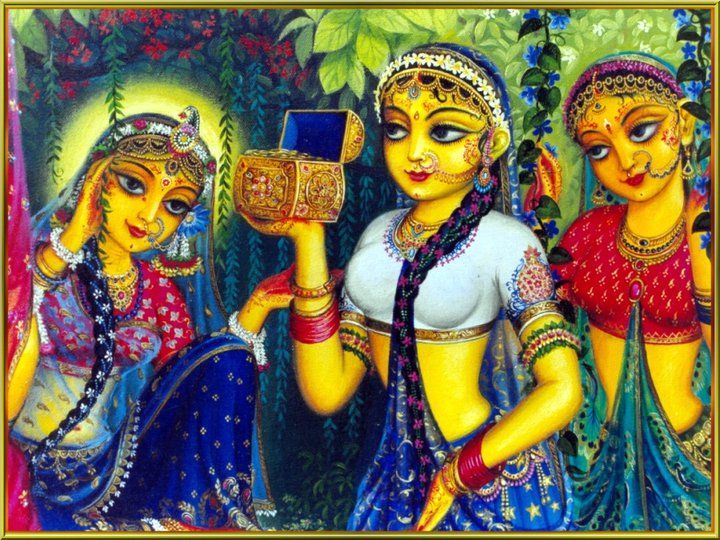 The following siddha deha (spiritual form) meditation is presented for the blessed few that are spiritually hankering to become loyal maidservants of Srimati Radharani in the bowers of Vrndavana (radha-pada dasis).

Regardless of how one has attained his/her siddha deha, this is an ideal meditation on manjari svarupa i.e. siddha deha. Daily meditating like this will purify one’s material existence (bhuta-suddhi), produce a dynamic divine mentality (divya abhimana), and permanently fix one in their eternal spiritual body, which will be clearly seen in this life at the stage of bhava bhakti. Jai Jai Sri Radhe!

Raganuga sadhakas worshiping in the mood of Madhuri Radha’s maidservants should always think as follows:

“I am a beautiful youthful Vraja kisori (12-14) with a robust form adorned with varieties of gold and jewel ornaments. I am expert in all the 64 artistic talents. When Sri Govinda perceives the secret love I cherish for Him, He becomes overwhelmed with the bliss of Eros.

I know the art of sweet speech and pleasant conversation. My brilliant golden form, adorned in dazzling blue cloth and lovely ornaments, is full of the mellows of transcendental bliss.

I delight in music and singing, and overflow with a unique form of madhura-rati called bhavollasa [special loving attachment to Sri Radhika].

Throughout the day and night my heart is filled with love for Radha-Govinda Yugala. With all my pleasant qualities and various feminine gestures, I arouse feelings of love [within Radha-Madhava].

I am formed from my Guru’s mercy, and I always follow my beloved Guru-devi. Gandharvika Radha is my group leader, and I serve within the party of Visakha-sakhi. As a follower of Srimati Radhika, I live in Yavata, and always think how to serve Radha like the other sakhis in madhura-rati.

I forever remain beside Radha-Krishna as Their graceful tender maidservant fanning Them, dressing Sri Radha, and rendering all kinds of amazing and tasteful sweet sevas for Their satisfaction.

All glories to my eternal Isvari, Swamini Sri Radha and Her infinitely gorgeous Govinda. May Radha-Govinda Yugala always astonish me with Their Vraja madhurya-lilas, and eternally engage me in Their blissful seva.” (adapted Paddhati [83-91], Sri Dhyanacandra Gosvami)

In the siddha-pranali system, the Guru privately tells a qualified disciple the 11 aspects of his siddha deha known as ekadasa-bhava, which include the disciple’s eternal spiritual name in Krishna lila, age, dress, seva, kunja, mood, sakhi group leader like Lalita or Visakha, and so on. As learned from his own Guru, Sri Guru then teaches the disciple the same method to realize his/her eternal spiritual identity, siddha deha.