From the first day of spring, Vasanta Pancami (Visnupriya’s appearance day) until Gaura Purnima, Lord Gauranga plays Holi for 40 days continuously. On each day of these 40 days, Sri Gaurasundara performs Holi lila in the homes of His various confidential devotees. First Holi is in Advaitacarya’s house on Vasanta Pancami. Then on Trayodasi, He plays Holi in Nityananda’s house. In this month on Sukla Sasthi (March 6) , Gauranga plays Holi in Gauridasa Pandita’s house. Then on astami, in Uddharana Datta’s house. On Purnima, Mahaprabhu plays Holi in own home.

On the bank of the Ganga, Sri Gauranga divided His intimate devotees into two groups: One team with Gauranga, and one team with Gadadhara Pandita. In Gadadhara’s team, there were Svarupa Damodara, Mukunda, Vasu Ghosa and many others. Gauranga’s side was led by Gauridasa Pandita. As previously in Krsna-lila, all the sakhis and manjaris sided with Radha and all the sakhas teamed up together with Krsna to attack the sakhis. And now in Nadiya, the same devotees sided with either Gaura or Gadadhara respectively. Picking up pichkaris (syringes), Gauranga’s team squirted Sri Gadadhara and his team. Then in retaliation, Svarupa Damodara and others began to hurl coloured powders bombarding Gauranga and His party from all sides. As the fun pastimes of Holi progressed, Gauridasa started clapping his hands and shouting excitingly, “Gauranga has won, Gauranga has won!” Then Svarupa Damodara angrily replied, “No, Gauranga has lost. The winner is my Gadadhara!” At this instant, some devotees slapped their chests and others sang and danced raising their hands into the sky, “Haribol! Haribol! Gaura Haribol!” (Mohandasa, disciple of Srinivasa Acarya)

THE LORD OF LOVE APPEARS 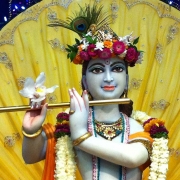 The Moonlike Faces of Rai & Kanu