We while walking along the beach beside the ocean of Srila Prabhupada’s vani, we found some rare gems of his words glorifying Sridhama Vrindavana. By reading and ruminating upon these sacred words, may we all expand our attitudes regarding and our appreciation for Vrindavana. Srila Prabhupada’s quotes have been arranged by topic.

“Simply by living [in Vrindavana], if they do not commit any sinful activities, they’ll go back to home [spiritual world of Goloka Vrindavana].”

Disciple: “Do the Vrajavasis need a spiritual master?”

Srila Prabhupada: “No, generally, naturally, the Vrajavasis are Krishna conscious.”

Disciple: “But they don’t have a spiritual master.”

“Because I am living in Vrindavana. Vrindavana raja [dust of Vrindavana] will cure me, will purify me. That’s a fact. Yes!” (721029SB.VRN) 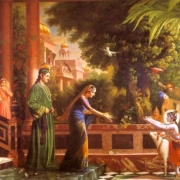 How to Chant Mantras? - part two

For Dust, We Live In Vraja

Why Live In Vraja?
Scroll to top