In 40 verses of Bhakti-rasamrita-sindhu (1.2.270-309), Srila Rupa Goswamipada defines and describes the sadhana practice of raganuga-bhakti. In this article, we will quote these verses along with supporting verses from other Gaudiya Vaisnava mahajanas to explain the subject.

Sri Krishna’s nitya-siddha associates in Vrindavana like Sri Radha, Lalita and Sri Rupa-manjari have a unique type of devotion called ragatmika-bhakti, which is defined as “an intense, love-filled thirst for Sri Krishna which makes them fully absorbed in giving pleasure and satisfaction to Sri Krishna. Raganuga-bhakti is bhakti that follows (anuga) the devotional mood and feelings of these ragatmika devotees.” (Brs. 1.2.270-72)

There are two types of ragatmika-bhakti among Sri Krishna’s eternal associates in Vrindavana:

1) Sambandha-rupa, which is inspired by fully identifying oneself as the parent, friend, or servant of Govinda in vatsatya, sakhya or dasya ratis;

Kamarupa ragatmika bhakti is, “a particular type of intense madhurya prema bhakti with full and natural absorption in the beloved, which produces an intrinsic thirst for a conjugal relationship with Krishna only for the purpose of giving happiness to Krishna, krishna sukha artha kevalam.” (Brs. 1.2.283, 284)

What is the difference? Kamarupa-bhakti means bhakti, or pure love, prema for Krishna, with conjugal actions only. Whereas, kamatmika-bhakti is conjugal actions along with pure conjugal feelings and emotions; a complete and divine absorption of one’s transcendental body, mind and heart (atmika).”

In this world of mundane men and women, the word kama commonly means personal desire or lust, which includes actions performed to gratify one’s selfish desires at the expense of another. In relation to Sri Krishna’s divine Vraja-gopis of the transcendental world, however, the word kama actually means intense selfless and self-forgetful love. The gopis’ kama is actually Krishna prema, divine pure love. The cowherd damsels of Vrajabhumi are totally selfless transcendental ladies, possessing immaculately pure minds and hearts. Thus even though the Vraja-gopis express intensely passionate conjugal feelings and actions toward Sri Krishna, they are completely devoid of even a scent of lust or selfish desire. The Vraja-gopis live only to please Shyamasundara.

The Agama sastras rightly say that, “the ‘kama’ of the Vraja-gopis has become famous simply as pristine Krishna prema, premaiva gopa-rämäëäà käma pratham.” (Brs. 1.2.285) And the proof that the gopis’ prema is absolutely pure, perfect and exalted is that the most respected and dearest devotees of Bhagavan Sri Krishna, bhagavata priya, beginning with Uddhava Mahasaya desire to attain it. (Brs. 1.2.286)

Since there are two types of ragatmika-bhakti found in Sri Krishna’s eternal Vrajavasi devotees, there are two paths of bhajana in allegiance to them.

1) Sambandhanuga-bhakti—a type of devotion where a sadhaka constantly identifies with and meditates on his relationship (sambandha) with Sri Krishna as either a parent, friend or servant. (Brs. 1.2.290, 305)

2) Kamanuga-bhakti—a type of devotion where a sadhaka is filled with longing, thirst and eagerness to serve and follow (not imitate) the kamatmika Vraja-gopis like Srimati Radharani, Lalita, Vishakha, Sri Rupa and Rati manjari. (Brs. 1.2.297-298)

Srila Visvanatha Cakravartipada comments, “Kamanuga sadhana bhakti is that bhakti filled with activities that follow in the footsteps of the Vraja-gopis’ actions, which are inspired by their inherent conjugal prema (kama), and that is inspired by the same divine love thirst. Actions are of two kinds, namely mental services (manasi-seva) and physical services performed with the external senses.”

There are two paths of kamanuga sadhana bhakti for sadhakas following the Vraja-gopis.

In this devotion, there are two kinds of activities (mental, physical) inspired by the desire for a direct experience of giving conjugal enjoyment to Sri Krishna like the gopi group leaders in Vrindavana, Sri Radha, Lalita or Vishakha.

For raganuga sadhakas this is the main type of bhakti. Here the sadhaka’s very life (atma) is filled with the desire (iccha) to taste the sweet mood of love (bhava) of a particular gopi’s prema like Sri Radha or Sri Rupa or Rati manjari. (Brs. 1.2.299)

The sadhaka who is deeply desirous and greedy for the bhava or divine loving feelings of Sri Krishna’s kamatmika Vraja-gopis (vraja vasa jana bhava lubdho) is qualified to practice raganuga-bhakti sadhana. (Brs. 1.2.291)

In other words, it means that you are very attracted to the Vraja-gopis and manjaris, and really want to experience their moods and mellow sweet feelings of divine love for Sri Sri Radha and Krishna while serving them with the greatest feelings of submission and dedication. Bhava lubdho means greed to attain gopi-bhava, manjari-bhava. This is the main qualification to practice raganuga-bhakti.

Although Rupa Goswami says raganuga-bhakti starts with divine greed, lobha, Sri Jiva Goswami says it begins with taste, ruchi. “By reading scriptures or hearing from one’s teacher about the ragatmika-bhakti of Sri Krishna eternal associates in Vrindavana one develops a taste [taste is born] for the feelings and sevas of those eternal associates, sastradi srutasu ragatmikaya bhakteh ruchir jayate.”

“Then when one gets taste for the raga of the ragatmika janas of Vraja, even though raga itself has not yet manifested in the sadhaka, one’s heart becomes like a crystal reflecting the moonshine of their raga. Then according to one’s taste, ruchi, for that raga one practices raganuga-bhakti, tadiyam ragam rucyanugacchanti raganuga pravartate.”

“Raganuga-bhakti is impelled only by taste and not by any scriptural injunction, ruchi matra pravrtya vidhi prayukta na.” (Bhakti Sandarbha 310)

What is the proof that I have taste for raganuga-bhakti? Sri Jiva Goswamipada says, “When this taste, ruchi, appears, one then loses his taste and attraction for anything else but raganuga-bhakti, bhakti vyatirekhena ruchitvam.” (Bhakti Sandarbha anu. 310)

The main driving force of raganuga-bhakti is taste, which means you have a liking, fondness for and eager interest in it. Sri Jiva Goswamipada comments, “The path of raganuga-bhakti is inspired by taste, which plays the main, predominant role. And mental worship [manasi-seva of Radha-Krishna] is the main practice, ruchi pradhanasya margasya manah pradhanatvat.” (Bhakti Sandarbh anu. 311)

VIII. Sacred Greed: How to Get It?

If you appreciate, taste or realize even to some degree the sweetness of the gopis’ prema after hearing/reading (bhava madhurya shrute) scriptures such as Tenth Canto Srimad Bhagavatam, Stavavali, Ujjvala Nilamani, Radha-rasa Sudhanidhi etc., that means that divine greed has appeared.

Srila Rupa Goswamipada says, “When a devotee realizes to some degree and yearns for the sweetness of the mutual feelings of Krishna and His nitya-siddha Vrajavasis by hearing the scriptures, without depending on scriptural injunctions or logical arguments, then one has attained sacred greed.”

In other words, after hearing/reading about the manjaris’ many sevas performed for the pleasure of Radha Govinda and their sweet loving exchanges with Srimati Radhika, one may deeply hanker to taste and experience this wonderful Vraja madhurya-prema. If you do, that means you are greedy for love divine and also a very fortunate devotee.

We want to comment on Srila Rupa Goswamipada’s phrase quoted above (Brs. 1.2.292), “the raganuga-sadhaka does not depend on scriptural injunctions.” Some devotees mistakenly think this means that raganuga-bhakti is “spontaneous”, so I now I don’t need to read scriptures anymore. This is dead wrong! From the beginning of bhakti to the perfection of prema bhakti, all sadhakas always need to hear, read, study and follow the scriptures in order to establish, nourish, strengthen, enthuse, deepen and perfect their individual bhajana practices.

How does one get “divine greed” to follow the gopis of Vrindavana?

Srila Rupa Goswamipada describes four ways to obtain divine greed for gopi-bhava and the cherished seva of Sri Radha and Her sakhi manjaris.

What happens is that after hearing/reading about the sweet and playful conjugal feelings displayed by the Vraja-gopis, one begins to think, “I also want to taste and experience this irresistible gopi-bhava of Sri Radha and Her sakhi manjaris.” Thus divine greed has appeared!

Hear/read about the sweetness of Radha-Krishna’s conjugal pastimes along with Their dear sakhis and manjaris, madhurya lila nishamya. (Brs. 1.2.300)

Sri Jiva Goswamipada explains the effect of Thakuraji’s darshana thus, “Even though Sri Rupa Goswami says (Brs. 1.2.239), ‘Don’t look at the Govindaji murti in Vrindavana if you still desire to enjoy society, friendship and love,’ he really means to say, ‘Yes, you must see Govindaji! Then you will experience the delightful sweetness of Krishna’s form and forget everything else.’” Just see the power of the famous bewitching Thakurajis of Vrindavana! Nevertheless, attaining greed for gopi-bhava just by murti darshana is very rare.

Mukunda Goswami (sishya of Srila Krishnadasa Kaviraja) explains, “Srila Rupa Goswamipada says that bhava [gopi-bhava] may awaken in an offense less person (sad dhiyam bhava janmane) just by seeing Sri Krishna’s murti or painting. (Brs. 1.2.238) Even then the deep hankering (lobha/greed) to practice raganuga-bhakti is very rare. It can only be attained by the grace of Krishna or Krishna’s devotee.”

“The only (matra) cause of getting the greed to follow raganuga-bhakti sadhana is the mercy of Krishna and His devotee, kåñëa-tad-bhakta-käruëya-mätra-läbhaika-hetukä.” (Brs. 1.2.309)

Although Srila Rupa Goswamipada says only bhakta karunya, Srila Visvanatha Cakravartipada distinguishes that “tad bhakta”, saying ‘anuragi bhakta krpa’, which means the mercy received from a Vaisnava who is passionately attached to the sweet feelings of Sri Krishna’s nitya-siddha Vrajavasis and following the path of raganuga-bhakti. Since it’s rare to receive mercy directly from Krishna, sacred greed can only be attained by Vaisnava krpa.

1) Praktana—means mercy received in a past life from a raganuga bhakta manifesting in this life as a natural attraction or “divine greed” to surrender to a raganuga guru and continue one’s practice of raganuga-bhakti.

2) Adhunika—means “new mercy” acquired in the present life after surrendering to a raganuga guru and hearing about Radha-Krishna’s sweet loving pastimes with the Vraja-gopis. Then by the guru’s mercy, greed will awaken within one. (Raga-vartma candrika I.6) Read more in part three.

Do One Good Deed Today 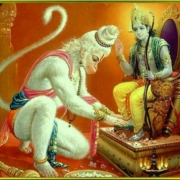