There is no doubt that spreading Harinama sankirtana was/is an important part of Mahaprabhu’s mission. “To preach Nama [Sri Krishna’s Holy Names], which is the yuga dharma for Kali-yuga, Sri Krishna has taken a golden complexion and descended as Sri Chaitanya, kali-yuge yuga-dharma namera pracära, tathi lägi péta-varëa caitanyävatära.” (Cc. 1.3.40)

However, Srila Krishnadasa Kaviraja and other Gaudiya acharyas say that the main or primary purpose of Mahaprabhu’s descent was to relish the madhurya-prema of the Vraja-gopis and to propagate raganuga-bhakti. “The primary cause (mula karana) for the descent of Sri Chaitanya was to taste prema rasa and preach raganuga-bhakti to the world, avatara mula karana, prema-rasa-asvadana, raga-marga bhakti loke pracäraëa. (Cc. 1.4.14-15)

Although Mahaprabhu especially came to preach raganuga-bhakti, He personally spoke very little on the subject. Through His empowered followers, however, such as the six Goswamis, and especially Srila Rupa Goswamipada and Srila Raghunatha dasa Goswamipada, Sri Chaitanya did elaborate upon and write about the principles and practices of raganuga sadhana bhakti. Mahaprabhu’s method of teaching raganuga-bhakti resembles that of a charitable and compassionate king desiring to give abundant charity to his subjects. He won’t do it personally, however, but he will engage his trusted ministers to distribute his wealth.

Thus from reading the works of the six Goswamis, especially Srila Rupa Goswamipada and Srila Raghunatha dasa Goswamipada, it is clear that Sri Chaitanya Mahaprabhu appeared in this particular Kali-yuga to teach the kamanuga type of raganuga-bhakti following in the footsteps of the sakhis and manjaris serving Srimati Radharani.

Srila Krishnadasa Kaviraja explains, “Mahaprabhu Himself exclusively accepted gopi-bhava in the mood of the lovers of Vrajendrananda Sri Krishna, gopi-bhava prabhu dhariyache ekanta, vrajendra-nandane mane kanta.” (Cc. 1.17.277) If one examines, he will also see that the six Goswamis, Lokanatha and Krishna dasa Kaviraja, Narottama dasa Thakura, Visvanatha Cakravartipada, and all the Gaudiya Vaisnava acharyas, along with their lineages, have also accepted gopi-bhava to serve as manjaris of Sri Radha in Vraja Gokula.

Not only did Sri Chaitanya Mahaprabhu personally accept Vraja gopi-bhava, but His closest associates taught that qualified Gaudiya Vaisnavas should also accept gopi-bhava, meditate upon their siddha dehas and mentally serve Radha-Krishna all day and night. And by doing this type of kamanuga raganuga-bhakti, Mahaprabhu promises that the Gaudiya sadhakas will get the lotus feet of Radha-Krishna. This point is confirmed below:

Gauranga continued, “Then while meditating upon your siddha deha, you should do seva in those pastimes. By practicing this sadhana [kamanuga raganuga-bhakti], you will get Radha-Krishna’s lotus feet, siddha-dehe cinti’ kare tahanni sevana, sakhi-bhave paya radha krsnera carana!” (Cc. 2.8.229)

One should carefully note here that these verses describe the final stage of raganuga-sadhana, wherein one is fully immersed all day and night in lila-smarana and manasi seva. Nevertheless, even in the beginning stage, a raganuga-sadhaka will also think of Radha-Krishna pastimes, meditate upon his siddha deha and serve the Playful Pair. The purity of the sadhaka’s mind and the sincerity of one’s heart will determine the depth of one’s absorption.

Overview of Vaidhi and Raganuga Bhakti

Before discussing the main topic of kamanuga raganuga bhakti from Srila Rupa Goswamipada’s Bhakti-rasamrita-sindhu, we will give an overview of vaidhi and raganuga-bhakti.

First of all, what is sadhana? Srila Rupa Goswamipada says, “Sadhana means practicing to serve Sri Krishna with the senses to attain the goal of bhava bhakti, kriti sadhya bhavet sadhya, bhava sa sadhanabhidha. (Brs. 1.2.2) There are two types of sadhana, devotion in practice, namely vaidhi and raganuga (Brs. 1.2.5. & (Cc. 2.22.108).

Unfortunately, there are many misconceptions about these two types of sadhana bhakti. Some acharyas say that raganuga-bhakti begins at the stage of nishtha, ruchi or even bhava. However, there is no evidence for this in the Bhakti-rasamrita-sindhu, Bhakti Sandarbha, Madhurya Kadambini or Raga Varma Candrika. Although it is also not true, some acharyas say that raganuga-bhakti comes after the stage of vaidhi sadhana bhakti. This is absolutely wrong! There is no guarantee that a vaidhi sadhaka will automatically be promoted to raganuga-bhakti.

Srila Rupa Goswamipada does not agree with this either. Rather he says, “The only cause of obtaining the greed to begin raganuga-bhakti sadhana is mercy—the compassion of Krishna or His devotee, krishna tad bhakta karunya matra labhaika.” (Brs. 1.2.309) And when and from where will this greed come from?

Srila Rupa Goswamipada answers, “Even ten million lifetimes of following regulative principles [vaidhi-bhakti] will not give you a taste for Krishna bhakti. The only price to attain it is greed! Wherever you can find it, you should buy it immediately, krishna bhakti rasa bhavita matih, kriyatam yadi kuto pi labhyate, tatra laulyam api mulyam ekalam, janma koti sukrtair na labhyate.” (Padyavali 13,14/Cc. 2.8.70)

Where can you find it? You can find it wherever advanced devotees are speaking Radha-Krishna katha. Go there and listen—hear with an eager and submissive mind and heart. Then you will obtain the divine greed to taste pure Krishna bhakti.

Srila Visvanatha Cakravartipada answers, “Greed to follow the path of raga bhakti begins (arabhya) [ed. or at least can begin] when one surrenders to the Guru, lobho raga vartma vartinam bhaktanam guru-padashraya lakshanam arabhya.” (Raga-vartma-candrika I.8) This means the stage of sadhu-sanga and taking initiation. Later on, Srila Visvanatha Cakravartipada says raganuga-bhakti starts at the stage of anartha-nivrtti which forms the beginning platform of sadhana bhakti along with sadhu sanga and bhajana kriya.

In other words, one can begin the practice of either vaidhi-sadhana or raganuga-bhakti sadhana at the stage of anartha-nivrtti. The difference between a vaidhi sadhaka and raganuga-sadhaka lies not in personal purity, but in their mood, motivation to serve Krishna, and their greed to taste Krishna bhakti. Read more in part two.

A Siddha in Bhajana

Krishna Falls in Love with Radha 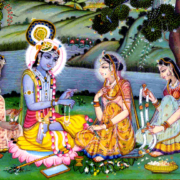