Vrnda-devi’s asta-kaliya-lila narration to Lord Shiva continued. Note: The following entries are unedited, presented as it is, downloaded from Net.

Vrinda-devi said, “O Narada, please hear attentively. Having entered the forest and having played there with his friends for a while, Sri Krishna then gladly sports there, in the forest by means of various pastimes. Then, having deceived all, and surrounded by two or three friends, Sri Krishna, being eager to see his beloved, would gladly go to the rendezvous.

Radha too, who had come home, on seeing Krishna , goes, after deceiving her elders, under the pretext of Sun-worship etc. or for collecting flowers, to the forest with a desire to meet her lover. Thus Radha-Govinda, having, after many efforts, met in the forest, gladly sport there for the (whole) day with various pastimes.

Sometimes Radha-Govinda get upon a swing and are rocked to and fro by their friends. Sometimes, Hari, deceived by the bevies of his beloveds, is seen, searching his flute dropped from his hand, and hidden by his beloved. Sri Krishna, made to laugh by them by means of merriment, remains there.

Then Radha-Govinda, O Narada, being tired due to many pastimes proper for the time in the groves endowed with vernal breezes on all sides, resort, with their attendants, to the root of a tree, and sitting on a divine seat, drink liquor.

O best sage. Then Radha-Govinda, intoxicated due to the liquor, with their eyes closed due to sleep, holding each other’s hands, being under the influence of Cupid’s arrows, and desiring to sport, enter, with their words and mind stumbling on the path. There Radha-Madhava sport like a female elephant and (the male elephant,) the lord of the herd.

All the friends also, intoxicated by wine, and with their eyes troubled by sleep (i.e. drowsy) sleep all around in the charming bowers. Again and again incited by his beloved, Krishna , the lord, would go near all, with a separate body (for each) and simultaneously.

Having satisfied all of them as a lord of elephants satisfies the female elephants, Sri Krishna would, along with his beloved Radharani and with them, go to the lake to sport.

Then Radha-Govinda, with their attendants, sport bet-ween themselves by sprinkling water (on each other). They are adorned with garments, garlands, sandal(-pastes), and also with divine ornaments. O sage, I have there, in a chamber full of divine gems, on the bank of the lake, already arranged fruits and roots.

Hari, having eaten first, and being clasped by his beloved, and being served by two or three (maids) would go to a bed made of flowers. There, being served (by them) with tämbulas, fans and shampooing of his feet, Sri Krishna laughing with them, and remembering his beloved rejoices.

Radhika too, when Hari is asleep, extremely delighted along with her attendants,. having put her heart into him, eats what is left over (by him). Having but eaten a little there, Radha would go to the bed-chamber to see her lover’s face as the female cakora bird sees the moon. The maids there have told (her) about his having chewed the tämbula. Kishori also chews tämbulas and distributes them among her dear friends.

Krishna too, desiring to hear their free mutual talk, though sleepless, covers himself with a piece of cloth,. appearing as if he is asleep. Those too, looking at one another in jest, and getting the hint from somewhere, biting their ton-gues with their teeth, look at one another’s face.

Merged as it were into the ocean of bashfulness, the sakhis do not say anything for a moment. Just after a moment, having removed the piece of cloth from his body, and saying ‘You were really asleep’ they laugh and make Krishna laugh too.

Thus sporting with the sakhis by means (of jokes etc. causing) laughter, and having, for a moment, experienced the pleasure of sleep, Shyama sits upon the seat gladly spread by the manjaris, and Radha-Govinda having mutually staked necklaces, kisses, embraces and garments, play with dice preceded by jocular talk.

Though defeated by his beloved Krishna, saying, ‘I have won’, pro-ceeds to seize Radha’s necklace etc. and is beaten by her. Thus beaten by Radha on his lotus-like face with her hand Krishna, being dejected in his mind, thinks of going. “If, O honourable lady, I am defeated, then accept what is staked (viz.) kisses etc. offered by me.”

On his saying so Kishori would act like that to see the crookedness of his eyebrows and to hear his words of reproach. (Padma Purana, patalakhanda cp. 83.44-75) More part three. Radha-kunda nitya-lila ki jai! Radha Govinda Yugala seva ki jai! Jaya Jaya Sri Radhe!

Secrecy and the Mystic Mantra Science 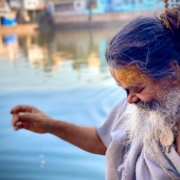 Read Daily To Destroy The Disease

What is the Identity and Function of Sri Guru? Part Four
0 replies