Vrinda said, “O Muniji! There with his father, paternal uncles, their sons, and Baladeva, Krishna eats various kinds of foods like those that are chewed, those that are sucked etc. Even before Krishna entertains a desire, Radhika, through her friends, would send dressed foods to his house.

Hari, praising them, and eating them with his father etc. would, with the bards, go to the assembly hall. The friends (of Radha), that had come there having brought with them many foods, take (from his house) many kinds (of food) given by Yasoda there and also whatever is left over by Krishna.

Having brought all that, they inform Radhika of it. Radha too, along with her group of friends, having eaten it in order and being decorated by her friends, would be (ready) to meet by appointment (her lover i.e. Krishna).

‘From here on there some friend is sent away by me’. Met by her, Radhika, surrounded by her friends, and having put on a dress proper for white (i.e. bright) or black (i.e. dark) night goes to the chamber having divine jewels, near Yamuna.

Krishna also, seeing their curious things, then having heard delightful music from Katyayani, and having properly pleased them with (gifts of) wealth and grains, and propitiated by people, goes with his mother to His sleeping quarters.

When Krishna’s mother departs, Krishna, having eaten, comes here—to the rendezvous—unnoticed and with his beloved. Both Radha-Madhava meet here and play in the groves of trees, with many sports, with Krishna’s dance with the cowherdess, accom-panied with singing and instrumental music and laughter.

Thus having spent two watches and a half of the night in sporting, the two desiring to sleep, enter, unnoticed by female birds, the bower. There, in the solitary place, the two sleep on a charming bed made of flowers and for sport, and are served by their female friends. Thus I have told you the full daily life of Hari. O Narada, even sinners who hear this narration are immediately liberated .” (Padma Purana, patalakhanda cp. 83.91-105) Radha Govinda Yugala’s blissful lilas ki jai! Vrnda-Narada manjari sadhana shiksha ki jai! Jaya Jaya Sri Radhe! 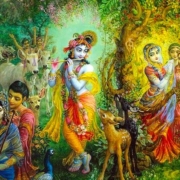