Vrinda-devi said, “O Naradaji! Then having heard the mutual wordy fight among the särikäs and the parrots, Radha-Madhava, desiring to go home, move out from that place. Having allowed his beloved (to go), Krishna would go to the cows.

Radha, accompanied by the circle of gopis goes to the Sun’s abode (temple). Having gone a little away from there, Hari, again, returning, after having put on the dress of a Brähmaëa, goes to the Sun’s abode. Requested by her friends, Sri Krishna would worship the Sun there, with Vedas (hymns), containing jokes and composed then only. Then the clever ones, having recognised their lover who makes himself known, merge in the ocean of joy, and do not know themselves or other (persons).

Having thus passed two watches and a half in various sports, Radhe-Shyama go home, and Krishna would go (to the place) of the cows. O sage, Krishna, joining his friends, and taking the cows from all sides, comes playing upon the flute joyfully to Vraja.

Then, all like Nanda and others, so also women and children, hearing the sound of Hari’s flute, and also seeing the sky full of dust (raised) by the cows, give up all their jobs, and being eager to see Krishna go towards him.

Krishna also, joining all the residents of Vraja, on the royal path, at Vraja-gate—wherever they are—(honours all) as before in due order— by means of seeing them, touching them, speaking to them, looking them with a smile, saluting with words and physically the old cowherds, and saluting his parents and Rohini also (in such a way that) the eight parts (of the body touch the ground).

O Narada, so also Krishna’s beloved Radhaji with a modest side glance. Thus very much and properly respected by the residents of Vraja, having sent the cows to the cowstall, Govinda goes, after being request-ed by his parents to his abode with his brother.

Having bathed there, having drunk (milk), having eaten a little, and being allowed by his mother, Krishna, with a desire to milk the cows, again goes to the cowstall. Having milked them, and got them milked, having made some of them drink (water), be, being followed by hundreds of venerable men, Krishna goes home with his father. (Padma Purana, patalakhanda cp. 83.76-90) More part six. Sri Krishna asta-kaliya-lila ki jai! Radha Govinda Yugala ki jai! Jaya Jaya Sri Radhe! 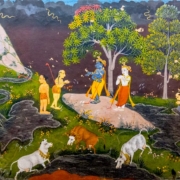 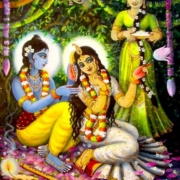 Japa Mini Lila Meditations 000 “My Very Own Radha and Krishna”

The Truth of Manjari Sadhana part six
Scroll to top