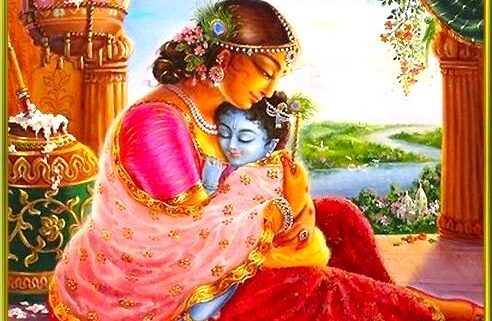 First the Sri Krishna desired to descend on earth to increase the fortune of Yasoda and Nanda. Also at that time Krishna wanted to relish the sweet mellow of srngara rasa (paramour love) while enacting His worldly pastimes. For these two reasons the Sri Krishna appeared within the material creation on Bhuloka, (earth planet), along with His parents, friends, and other eternal associates.

Another distinction of Sri Krishna’s earthly pastimes is that when the eternally liberated gopis such as Srimati Radharani, Candravali, and others appeared, the Srutis personified also appeared in the homes of other gopis, because they had previously cultivated the desire to serve Sri Krishna as Vraja gopis.

The Dandakaranya sages, upon seeing the svakiya bhava (the sweet conjugal relationship) of Sri Krishna Ramacandra and Sitadevi, desired to have the same relationship with their Madana Gopala. Upon attaining perfection in their sadhana they achieved the fortunate position of appearing as gopis in Vrindavana.

Yogamaya, Sri Krishna’s pastime potency who possesses unlimited abilities, appeared invisibly in Gokula to arrange this, and perform other difficult tasks on behalf of the Sri Krishna. Sri Nanda, Yasoda, and others appeared in Brhadvana (Mahavana) before Sri Krishna.

The gopas, gopis, and other eternally liberated associates appeared afterwards. Then those who had attained perfection by sadhana, namely the sruti-caris and muni-caris, took birth in Vrindavana.

Learning of Krishna’s imminent appearance, the earth personified, feeling like a wife happily greeting her husband after a long separation, immersed in unlimited joy. At the time of Krishna’s birth the general mass of people tasted the inner bliss that devotees forever relish.

Auspicious signs abounded everywhere. Auspicious sacrificial fires glowed in all directions. Pure gentle breezes brought a refreshing coolness like devotees who satisfy and sanctify everyone with their calm, sweet and affectionate behaviour.

The whole atmosphere became as completely purified as the heart of a devotee. The devotees once again found peace and prosperity in worshiping the lotus feet of Sri Hari. Fruits filled the jubilant trees. At that time all the directions became as pure and joyful as the mind of a devotee who has received the mercy of Sri Hari.

Just as gems, mantras, or medicines can a remove a poisonous disease from the body of a man, the advent of the Sri Krishna relieved the world from the contamination of material existence and the sinful effect of the demons.

On the eighth day of the waning moon in Bhadra month an auspicious, favourable, obstacle-free time appeared. Just at that sweet moment the Rohini Naksatra, along with the good qualities of the moon and an auspicious conjunction of stars called Ayusman, appeared in the sky to give shelter to gentle persons.

Yogesvara Sri Krishna, the personification of complete bliss, appeared amidst great festivities. Krishna manifested the wonderful pastime of His appearance out of His love and compassion for the conditioned souls.

Due to austerities performed in previous lives, Vasudeva and Devaki received the opportunity to momentarily relish parental affection for Sri Krishna when He appeared before them in His form as Vasudeva. The four symbols of Visnu (sankha, cakra, gada, padma) adorned His hands and feet. The flute, flower garland, and kaustubha mani, although present within Him, had not yet manifested.

In fear of cruel Kamsa, Vasudeva transfered all his wives except Devaki to Gokula. He sent Rohini to the house of Vrajaraja Nanda. By the sweet will of the Sri Krishna, Yogamaya arranged for the seventh child of Devaki (Balarama) to enter the womb of Rohini. As a result, Balarama appeared in the home of Vrajaraja Nanda before the birth of Krishna.

Thereafter in fear of Kamsa, Vasudeva brought Krishna to Gokula, where He appeared as Govinda before Nanda and Yasoda, His eternal parents who have been smothering Him with the sweetest form of parental love since time immemorial.

Sri Hari, who is bliss personified, appeared in the home of Nanda Maharaja, the king of Vrindavana for three reasons: to engage the self-satisfied sages in devotional service, to please the devotees by performing sweet transcendental pastimes, and to relieve the earth’s burden caused by the demons.

Everyone in the maternity room swelled with joy upon seeing Sri Krishna’s exquisite transcendental form that looked like a creeper of beauty. Mother Yasoda resembled a lake of spiritual ecstasy in which a brilliant blue lotus of personified bliss had appeared.

After Yasoda and her family members fell asleep in the maternity room, Hari cried beautifully like a newborn baby. His crying sounded like the maha-vakya omkara announcing the auspicious arrival of His pastimes. When the ladies of Vrindavana heard the sweet sound of Krishna’s crying, they woke up and ran to see the Sri Krishna.

With the mellow of their matchless overflowing affection they anointed Gopala’s body. The natural fragrance of Krishna’s body smelled just like musk. After the ladies bathed Krishna in sweet ambrosia, He looked cleansed and beautiful. Then they smeared Krishna’s body with fragrant sandalwood pulp. Gopala’s little arms were as delicate as the tender leaves of a tree.

Krishna looked like a fresh rain cloud decorated with the musk tilaka of the goddess of fortune of the three worlds. His presence filled the maternity room with good fortune. Although a mere baby, Krishna had a head full of curly hair. To hide the unique signs of Bhagavan on His hands (goad, fish, conch etc.) Sri Krishna folded His delicate petal-like fingers into His lotus palm. At that time, Krishna laid on His back with His eyes closed.

Mother Yasoda awoke amidst the joyous chattering of the elderly gopis. Leaning over the bed she admired her gorgeous son. But upon noticing her own reflection on Krishna’s body, she imagined it another woman. Thinking that a witch had assumed her form to kidnap Krishna, Yasoda became bewildered and yelled, “Get out of here! You go away!” Spontaneously she cried out to Nrsimhadeva to protect her precious son.

Beholding Krishna’s tender face, Yasoda showered tears of affection that looked like an offering of a pearl necklace. Yasoda saw Krishna’s body as a mound of dark blue musk, softer than the butter churned from the milk ocean. While admiring the supremely delicate form of her son, Yasoda worried about His safety and feared the touch of her body might hurt his tender body.

As she leaned over the bed Yasoda bathed Krishna with the milk dripping from her breasts. The elderly gopis instructed Yasoda how to caress the baby in her lap, and affectionately push the nipple of her breast into Krishna’s mouth to feed Him. Due to Yasoda’s intense love, personified bliss flowed from her breasts as steady streams of milk. When milk sometimes spilled out of Krishna’s bimba fruit red lips onto His cheeks, Mother Yasoda would wipe His face with the edge of her cloth.

After feeding her son, Yasoda gazed affectionately at Him in wonder. Yasoda perceived that Krishna’s naturally reddish lips looked like bandhuka flowers. His reddish palms and foot soles resembled Java flowers, and His nails looked like mallika flowers. The beautiful, soft curly hairs on the right side of Krishna’s chest resembled the tender stems of a lotus.

Seeing the mark of Srivatsa on His chest, Yasoda thought it was her breast milk that had previously spilled out of His mouth. She tried unsuccessfully to remove these ‘milk stains’ with the edge of her cloth. Struck with wonder, Yasoda thought this must be the sign of a great personality.

Observing the sign of Laksmi (a small golden line) on the left side of Krishna’s chest, Yasoda thought a small yellow bird had made a nest amidst the leaves of a tamala tree. Could this be a streak of lightning resting on a rain cloud, or could it be the golden streaks marking a black gold-testing stone? Krishna’s delicate, leaf-like hands and feet, glowing pink like the rising sun, looked like clusters of lotus flowers floating in the Yamuna.

Sometimes Yasoda saw the curly, dark blue locks of baby Krishna as a swarm of bumblebees surrounding His face. Intoxicated from drinking too much honey nectar, the bees just hovered in the sky. His thick, beautiful blue tinged, glossy black hair appeared like the dark night. The two lotus eyes of Krishna looked like a pair of blue lotus buds. His cheeks resembled two huge bubbles floating in a lake of liquefied blue sapphires.

Krishna’s attractive ears looked like a pair of fresh unfurled leaves growing on a blue creeper. The tip of Krishna’s dark nose appeared like the sprout of a tree, and His nostrils looked like bubbles in the Yamuna. His lips resembled a pair of red Java flower buds.

Krishna’s chin rivaled a pair of ripe, red jambu fruits. Seeing the extraordinary beauty of her son fulfilled the purpose of her eyes and submerged Yasoda in an ocean of bliss. Read about Nandotsava in part eight. 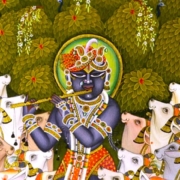 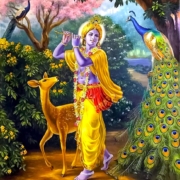 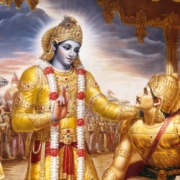 Do We Have Free Will?

Vegan or Bhakta: Which Way to Go?
0 replies