What is the difference between sincerely practicing bhakti and serving Krishna with and without diksha?

Diksha is a ritual involving surrendering of oneself to a spiritual guide to receive divine knowledge, purification and liberation. What counts most, however, is the humble mentality, submissive attitude and loving feelings behind a devotee’s practice. Sastras define diksha as an act of self-surrender, sincerely offering one’s body, mind, heart and very self, atma, to Sri Guru and the loving service of Bhagavan Sri Krishna.

“At the time of diksha, one fully surrenders his/her very self to Sri Guru. Krishna then spiritualizes one’s body [makes transcendental], and accepts that body and devotee as His very own. (Caitanya Caritamrita. 3.4.192)

Two atmas are mentioned, the disciple and Bhagavan Sri Krishna. The disciple offers and surrenders his/her self, atma-samarpana, to Guru. Sri Krishna then accepts that atma like Himself, atma-sama, in the sense that the new devotee becomes a divine being, very dear to Krishna’s heart.

Though purifying like all rites and rituals, the diksha ritual alone will not purify the heart. Only offenseless bhakti bhajan will purify one’s existence and deliver one to Krishna.

One may just chant Hare Krishna japa and practice Krishna bhakti without diksha. But one’s progress will be slow and full of obstacles. This is not the way of shastra, nor the million-year-old tradition of surrendering to a spiritual teacher, Sri Guru, taking diksha, humbly serving, and learning how to attain spiritual perfection, mukti and Krishna prem.

Such independent practice sans diksha is bound to be offensive and fraught with difficulties. Two major offenses will retard one’s progress, namely Nama Aparadha one and four: Sadhu ninda, offending the instructions and example of the sadhus and previous acharyas who all took diksha; and shastra ninda, offending, disregarding and not following the sacred scriptures which all direct one to surrender to a Guru and take diksha.

“Persons devoid of diksha who don’t worship Sri Hari are like animals, and attain no benefit in human life.”

“Without diksha, all one’s actions are worthless and one takes birth in an animal’s womb.”

In summary, although diksha is not the only requirement, it is absolutely necessary to attain spiritual perfection. Sri Sanatana Goswami says:

“Perfection is guaranteed for one who has unflinching faith in Bhagavan Sri Krishna, Sri Guru and one’s diksha mantra [Gopal mantra].”

The absolute necessity of a diksha Guru is beautifully described in the “Samadhi” chapter of the Hatha Yoga Pradipika (IV.9):

Thus every fortunate soul should take mantra diksha from a proper Guru. And for those who surrender to and humbly serve Sri Guru, the all-merciful master gives:

– mercy and love to overcome offenses and negative mentalities;

– and realized teachings to remove all doubts, and illuminate the path of proper bhakti bhajan leading to the eternal service of Sri Sri Radha-Govinda Yugala in Goloka Vrndavana! 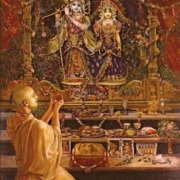 26 Qualities of a Devotee 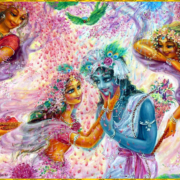 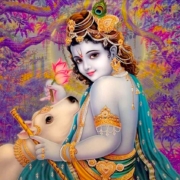 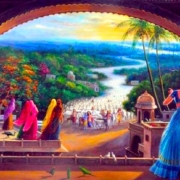 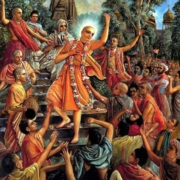 How To See Krishna Everywhere