Before He was a week old, Krishna began stealing. On the sixth day of Krishna’s advent, the fiendish witch Putana came to kill Him. But clever Gopala stole Putana’s prana to end Her devilish work. From then on, Gopala became known as Pranahari, “He who steals one’s very life!”

The poets glorify Sri Krishna in Vraja as the “crownjewel of all thieves”, caura cudamani! As a mere infant of three, it was Nanda Gopala’s daily pastime to stealthily steal butter from His neighbors. Between the ages of 5-10, Govinda often stole the lunch tiffins, clothes and ornaments of His cowherd companions.

At the beginning of His adolescence, Krishna stole the clothes of the Vraja kanyas, gopi vastra harana. As a robust youth, Shyama stole the hearts of Radha and the gopis with the captivating song of His murali calling them to Vamshivata for rasa.

Krishna’s thievery of the gopis is not partial, it is complete and absolute. The rasika janas say, gopala kamini jarash caura jara shikamanih, “For stealing everything from the damsels of Vraja, Krishna has become famous as “the crownjewel of adulterous thieves”.

After concluding His earthly pastimes, Sri Krishna took His divine entourage to the transcendental realm of Goloka Vrindavana. But even there Hari’s acts of thievery continued.

One day in Goloka, Krishna performed the biggest theft of His entire career! Gopinatha secretly stole the heart of His dearest Gandharvika Radha, and Her brilliant golden complexion (bhava & kanti) to appear in Kali-yuga as Gauranga to steal the hearts of anyone who sees Gauranga, remembers Gauranga or chants Gauranga’s transcendental name: GAURANGA!!!!!!!

The following is a list of Krishna’s many acts of thievery coming from a poem entitled, “Sri Chaurastakam”. By reading this wonderful offering of a loving Krishna bhakta, we can all better appreciate the unlimited vastness of Bhagavan Sri Krishna’s love for every living entity. Every verse of this wonderful prayer ends with the refrain, “I offer obeisances to Krishna “The King of Thieves”, cauradhipam krishnam aham namami.

From the beginning in Gokula, Nandulal stole the sins and the life-air of Putana. Makhanacora is the celebrated the baby butter thief. While roaming in Vraja, Gopala stole some clay and ate it, vraje carantam ca mrdo hi cauram.

The poem concludes with this verse:

“Hari steals the hearts of all good people, and He also steals their lifetimes’ of sins. And for those who surrender to His service, Krishna STEALS EVERYTHING!”

Out of His infinite compassion and kindness for us, Sri Krishna steals everything that is bad within us, and gives us everything that is good! May Giridhari Shyama, Hari Murari come one day and steal my heart. Other than this, I have no wealth; a mere beggar with a prayer. 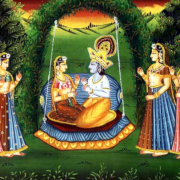 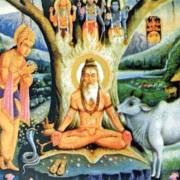 How Much Krishna Loves Radha
Scroll to top