Every afternoon, Radha-Govinda and the sakhis play in the prema rasa-filled water of Radha-kunda. While in the kunda, they relish different sporting activities like water splashing, hide and seek and battling with lotuses, which will now be described.

One day in Radha-kunda, after sporting and enjoying in different ways for about 2½ hours, Sri Krishna and the gopis become a little fatigued. Observing this, Radha’s maidservants (manjaris) invite everyone to relax in the refreshing cool waters of Radha-kunda.

Radha-Madhava and the sakhis gladly accept the invitation and prepare for Their divine water sports. The manjaris tie up the sakhis’ hair, remove their heavy saris and ornaments, and dress them in fine white bathing outfits. Shyama also wears thin white bathing cloth.

Eager to mitigate His love-fatigue and that of His girlfriends, Krishna enthusiastically enters Radha-kunda and begins sporting like an intoxicated elephant. Shyama’s eyes blossom like flowers of joy as He gazes upon the glistening bodies of the gopis, whose lovely features resemble the beautiful Radha-kunda.

The attractive azure eyes of the gopis look like the blue lotuses in the lake; their faces, flushed with the luster of love, mimic the pink lotuses; their bouncing locks of cobalt black hair are swarms of restless bees; their full breasts are like chakravaka birds; and their graceful golden arms are the soft stems of attractive lotus flowers.

Some timid sakhis stand on the shore, hesitating to enter. The gopis in Radha-kunda splash them with water, tug on their garments and giggle while pulling them into the kuëòa, clothes and all. Fearing Krishna’s attack, some gopis protect themselves by standing in knee or waist deep water.

Smiling proudly, Krishna stands in waist-deep water and begins bombarding them with water. The intoxicated elephants of Krishna’s eyes revel in a river of delight admiring the gopis’ gorgeous figures shining through their thin wet bathing attire. Similarly, the female elephants of the gopis’ eyes submerge in the nectar stream of Syama’s enticing form shimmering beneath His wet garments.

The gopis hold hands with each other to form a golden rope around Shyama. Then they move toward the center, tightening the circle as they draw closer to Krishna. All at once in a surprise attack, the sakhis dump loads and loads of water over Shyama’s head. To tolerate the downpour, Krishna covers His eyes while smiling blissfully.

In retaliation, Madhava drenches the gopis with such torrents of water that they become momentarily stunned. But even then, the radiant loving faces of the gopis remain as effulgent as the orb of the full moon.

Unable to tolerate Her sakhis’ defeat, Sri Radha launches a bold offensive, splashing Shyama with both hands. Using Her cupped hands, Kishori completely soaks Krishna with thick streams of water. As the glittering water continually cascades down Krishna’s chest, it appears that Shyama is being pierced by the irresistible power of Cupid’s flower arrows. Krishna’s flower garland and pearl necklace snap; only His Kaustubha withstands defeat.

From all the commotion, Radha-kunda becomes scented with flower pollen and honey falling off the pink, red, white and blue lotus flowers, and water lilies. The touch of Krishna and the Vraja-gopis increases the natural fragrance and coolness of the kunda. The musk, sandalwood and kunkuma falling from their bodies scents and tints the water with different attractive colors.

From a pavilion overlooking the kunda, Vrinda-devi, Nandimukhi and Dhanistha throw flower petals and loudly cheer for Swamini, “Jaya Radhe! Jaya Radhe!” From the opposite side of the lake, Subala and Kundalata, supporting Krishna’s side, shower flowers on Krishna while shouting, “Jaya Sri Krishna! Jaya Sri Krishna!”

Krishna renews His attack on the gopis by throwing armfuls of water. To protect themselves, the gentle gopis lower their heads and cover their eyes, ears and noses with their hands. With a thousand eyes, Shyama relishes the tender beauty of their lovely bodies; with a thousand feet, Krishna approaches them; with a thousand arms, He embraces them tightly; and with a thousand faces, Krishna softly kisses the doe-eyed gopis.

Seeing the golden faces and reddish pan-stained lips of Her sakhis turning pale from Krishna’s assault, sweet-voiced Radhika attacks Krishna with redoubled enthusiasm. The constant splashing of Radha and Her sakhis forces Krishna, the crest-jewel of lovers, to lower His head and say, “Stop, Stop! I am defeated.”

Radha, accepts Shyama’s surrender, stops spraying Him and bursts into laughter. Appreciating Radha’s blissful mood, one sakhi says, “O Radha! There is no need to splash Krishna anymore since He admits defeat. The flower garland on Hari’s head is hiding amidst His dark hair out of fear. The water has washed off His mineral powder designs, and the bees have rejected Rasika Mohana’s fallen flower garland.”

Lalita says, “O Swamini! Stop fighting now! Just see how Krishna’s topknot is undone, His tilaka has rubbed off, His earrings are shaking, and Govinda’s garland is torn to shreds. And now the glowing rays of Krishna’s Kaustubha gem have taken shelter of Your cheeks. O sakhi! Don’t torture Krishna anymore!”

The gopis celebrate their victory by slapping the water with their hands to make music, and sounds resembling croaking frogs, (jala manduka vaadya). Hearing the sound of thumping water, the peacocks mistake it for rumbling clouds, fan their feathers and dance madly. Madhumangala joins the peacocks while flapping his armpits and exclaiming ‘hee hee!’

During the water battles, sometimes Krishna defeats the gopis, and sometimes they defeat Krishna. From sporting in the water so long, the gopis’ bodies tire and become slightly thin. Consequently, their bangles start slipping from their wrists. Out of compassion, Krishna picks some lotus stems and lovingly fashions some bangles from them. Then Gopinatha ties them on the gopis’ wrists to keep their golden bangles from sliding off into the water.

After some time, the damsels of Vraja lose interest in splashing water as their creeper-like arms tire, and their braids, garlands and garments loosen. Similarly, their supporters also lose interest in cheering for their own team or ridiculing their opponents. Thus ends the water splashing pastime.

Srila Prabhupada Vyas Puja Part IV What is the Identity and Function of Sri Guru? 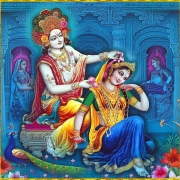 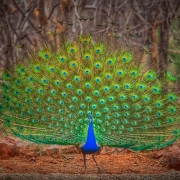 Remember Who Is Guru
0 replies