Before Their nightly rasa dance (ratri/nisa lila (10:48 p.m.-3.36 a.m.), Sri Sri Radha-Govindadeva meet Their beloved sakhis in a jeweled temple called the Yogapitha Mandir in Vrndavana. The entire area of Yogapitha appears like an island in Yamunaji. The island is formed by Yamunaji who rushes in from the north, divides into two branches flowing by the island’s east and west sides, and again unites in the south to form one gorgeous blue river. It appears like Yamunaji is holding Yogapitha on her lap with the arms of her beautiful waves.

From Yamunaji’s banks the island rises gradually to a small hillock shaped like a sea turtles’s back. More than fifty types of exotic trees embraced by fragrant flowering vines adorn the island. To facilitate learning lila and meditation, we present the individual features of Vrndavana’s Maha Yogapitha.

Govinda-sthali is the main name of Yogapitha which amazingly can change its colors according to time and the moods of Radha and Krishna. For various confidential reasons, the gopis call it Keli Mandir. When Sundari and the sakhis see Yogapitha, they succumb to sumptuous thoughts of Syama. The Vedas call it Gopala’s Simhasana Yogapitha.

From a drone view the entire golden-soiled area of Govinda-sthali, which stands on top of the hillock, looks like a huge lotus flower with thousands of petals. Each petal is actually a separate seva kunja of a specific sakhi for serving Syamasundara!

Desire Trees: The unlimited kalpa latas and vrksas (desire-fulfilling vines & trees) supply anything at any time. Fulfilling all Krishna’s seva needs, they regularly give lots of tasty fruits, fragrant powders, clothes, ornaments, scents and gems! The flower laden vines automatically form garlands for Krishna’s use. To satisfy Radha-Govinda, colorful jeweled swings decorated with fancy fabrics and flowers hang from the many desire trees.

Animals: Assorted animals, including black stags and twelve species of deer i.e. Renku, Camaru, and Rohita frolic in the forests and nibble on the fresh grass in Vrndavana.

Next to the beds are small tables with canisters of kajjala and kunkuma, crystal glasses, flower fans, jugs of honey nectar, mirrors of jewels, pan boxes, and perfumes. Aho! The kunjas look like jeweled temples, but the walls are merely flowering creepers and the roofs are just dense tree foliage.

From the four directions around the Yogapitha Mandir, there are four jeweled pathways down the hill to Yamunaji. Evenly spaced, super fragrant bakula trees line the paths. Colorful well-designed flower beds lie between the trees. At the end of each pathway are four beautiful jeweled bathing ghatas jutting into Yamunaji. 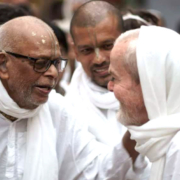