While Lord Jagannatha spent a fortnight in seclusion during His anavasara ceremony, Sri Caitanyadeva struggled with the most intense pangs of love in separation. Wrapped in Rādhā’s mahabhāva, Gaura felt one moment without Jagannatha Kṛṣṇa to be like four million years. One can only imagine how Mahaprabhu suffered without seeing His Prananatha for two long weeks. Even when Jagannatha Swami was granting daily darsana that was not enough to soothe the aching heart of Gauranga. Hence, every night Sri Caitanyadeva escaped from His tiny room at Gambhira to search for Sri Kṛṣṇa, hankering for His darsana.

Often late at night, Mahaprabhu ran to the Mandira hoping to get a glimpse of Jagannatha. Locked doors forced Gaura to climb the walls near Simha Dvara. Failing in His attempt, the golden Lord collapsed on the ground swooning in divine rapture. Sri Caitanyadeva, torn by the anguish of separation, then exhibited His extraordinary Kurma Caitanya rupa; arms and legs withdrawn into His torso, and head crunched down on His shoulders like a giant tortoise or pumpkin. This unique form of ecstasy in separation resembled the form of Lord Jagannatha.

Such astounding displays of divine love were occurring on a regular basis whenever Gauranga saw Lord Jagannatha. Now, it is inconceivable how, without any darsana whatsoever for two weeks, Sri Caitanyadeva survived in such an extremely tortuous state of misery. He could not, so Gauranga left Sri Ksetra, Purusottama Dhama, and walked twenty-four km. away to see Lord Ālālanātha. When Gauranga took darsana of Lord Alarnath, He did not see Him as Viṣṇu or Nārāyaṇa, but as Gopinatha Sri Kṛṣṇa, playing a flute. Sri Caitanyadeva’s ecstasy of seeing Lord Ālālanātha in this way has its parallel in a pastime of Rādhā-Kṛṣṇa. Therefore devotees in the line of Sri Caitanyadeva consider Lord Ālālanātha to be two-armed Sri Kṛṣṇa. 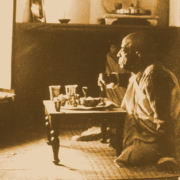 The Seven Excellences of Nama

The Dog Gets a Siddha Deha