My Friend You Begot a Son!

Srila Prabhupada said, “This date of Nandotsava is a very fortunate occasion. After Krishna’s birth, Maharaja Nanda celebrated a ceremony and this day is called Nandotsava. Nanda Maharaja was a little elderly when Krishna was born. At that time, some of his friends came to congratulate, ‘My dear friend, you have got a son in your old age!’ To his friends, Nanda Maharaja said, ‘How can you say I am old? Can old man cannot beget a child. I am young man!’” (Folio 690905VP.HAM)

Remembering Srila Prabhupada, Shri Gopala Chandra Ghosh recounted, “In 1960 or ‘61, Krishna’s birth ceremony abhisheka was performed at the Radha Damodara Temple at midnight. The next day all temples celebrate Nandotsava, Nanda Babas festival honoring Lord Krishna’s birth. They throw rupees, offer fruits and wear new clothes in the temple. Curd and turmeric are mixed up and thrown on the visitors. They sing of how the son of Nanda appeared here in Gokula. This service is performed with kértana, dancing, and chanting of hari-nama.

“Later, I learned that this was Srila Prabhupada’s own appearance anniversary day. At that time, I saw Prabhupada very playfully dancing in the Radha Damodara Temple’s open courtyard. He was covered with this yellow-colored pauri, the prasada from Thakuraji Damodara. Prabhupada was dancing in Braja style, singing, “Nanda ke ananda bhaiyo, jai kanaiya lala ki”. I also saw him throwing some sugar candies, annas and paisas to the local small boys.” (Our Srila Prabhupada, a Friend to All)

Once Srila Prabhupada said, “My birth name was Abhaya, which means there is no fear of death of this child. However, in my maternal uncle’s house, because I was born on the Nandotsava, they always called me ‘Nandadulal.’ (Folio 770719R1.VRN)

Once Srila Prabhupada told Yamuna dasi, “I am so glad that you remember my childhood name “Nandu”’ given by one of my uncles.” (SPL 70-09-16)

In his diary, a disciple named Shri Tamala Krishna Goswami writes that Srila Prabhupada said, “I was born on Nandotsava. It was a Tuesday, Mithuni Rasi, Mrgashirsha nakshatra.” 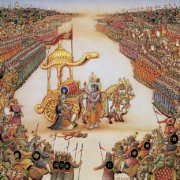 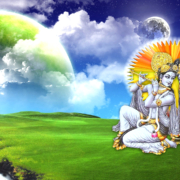