The Fall season in Vrindavana (Oct-Nov), Karttika, is surcharged with both sensual beauty and spiritual shakti. The peacocks freely advertise their rainbow colors, and tall trees scent the breeze with sweet aromas from their flowers. With the loving arms of her soothing waves, the Yamuna River offers crystal clear water for tasting and cooling currents for bathing.

Every day at the Radha-Damodara temple, thousands of Vaisnava pilgrims go around the temple, participate in the many kirtanas, and hear the enlightening Bhagavata discourses by different panditas speaking in turn. This spiritual atmosphere, swelling with sounds, scents and sentiments, saturates any sincere soul with ecstatic love for Sri Krishna.

All the months of India are named after different forms of Narayana like Madhava, Govinda, Keshava and so on as in Vaisnava tilaka. Similarly, the month of Karttika is called “Damodara” which also refers to a Vishnu form. This fact is confirmed in sanatana-siksha (Cc. 2.20.201), wherein Sri Chaitanya Mahaprabhu said:

“In the month of Äçvina, the predominating Deity is Padmanäbha, and in Kärttika it is Dämodara. This Dämodara [which the month is named after] is different from Rädhä Dämodara, the son of Nanda Mahäräja in Våndävana

Nevertheless, most Vaisnavas understand that the “Damodara month” refers to that naughty boy, Krishna, who Mother Yasoda bound around the waist with a rope, which took place on Dipavali day in Karttika. During this Damodara month, if one manages to capture Krishna with the ropes of pure devotion, he will be released from the bondage of repeated birth and death.

Gauòéya Vaiñëavas consider Radharani to be the presiding Deity for the month of because Sri Srila Rupa Goswamipada (Utkalika-vallari) refers to Radharani as Karttika-devi, the goddess of Karttika. Unlike others who call it the “Damodara” month, Gaudiyas, using the following scriptural evidence, refer to Karttika as the “Radha-Damodara” month.

“One day in Karttika, Shyama arrived late for His rendezvous with Priyaji in Her kunja. In loving anger, Manini Radha glanced at Shyama with frowning eyebrows. Using some golden vines, Kunjeshvari then tied a rope around Shyama’s belly to punish Him for not showing up as promised. Madhava pleaded that He was late because Maa Yashoda had kept Him home for a festival. Seeing Her mistake, Radha quickly untied Her beloved Damodara.” (Bhaviñya Puräëa, Uttara-khaëòa) Rädhäräëé’s desire to bind Krishna with Her love is fulfilled in this pastime. Thus Vrajavasis adore this Damodara, bound by Devi’s love.

The Garga-samhita tells another wonderful lila of Radha-Damodara: “One day as children Radha and Gopala were walking together in Bhandiravana along the shimmering blue waters of Kalindi. The lovely couple rested for a time under the cooling shade of a Banyan tree. In an instant, Yogamaya manifested their robust, youthful forms. Suddenly from nowhere, Lord Brahma arrived. Then acting as the officiating priest, Brahmaji performed a mock marriage with all the demigods in attendance. During the wedding ceremony the sari and dhoti of Radha and Krishna were tied together as is the custom in Vedic weddings. After the ceremony the guests left, and Radha-Govinda again assumed their childhood forms and walked home.” Since the Divine Couple were tied together at this time, some Vaiñëavas consider this pastime a lila of Radha-Damodara ki jai!

Who is My Guru? part two 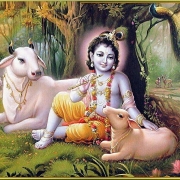 Holi In The Heart

A Few Words on Vidhi and Raga