Many devotees misunderstand the second offense in chanting Krishna’s Holy Name, and thus make nama-aparadha which blocks their spiritual progress.

“To consider the names of demigods like Lord Shiva or Lord Brahma to be equal to or independent of the name of Lord Vishnu.”

“One who sees differences between any of Lord Shiva’s qualities and names and those of Sri Vishnu is an antagonist [offender] to hari-nama.” (BB 1.2.86 tika)

“If one even thinks that Shiva’s names, forms, qualities and pastimes are different from those of Sri Vishnu, he commits a serious offence against the holy name.” (Hari-bhakti Vilasa 11.152 tika)

“One who considers the qualities, names and other attributes of Lord Shiva to be different from those of Vishnu commits a serious offence.” (Siksastaka 2 tika)

The above translations (2-5), which are about the same, clearly establish the true meaning of the second offense. If you have misunderstood and are making this offense, we hope you will now adjust your vision, avoid this offense, and begin chanting the pure Holy Names of Sri Krishna, shuddha harinama.

May all confusion rest with the establishment of truth. And may all see the harmony within the myriad of transcendental forms of the sweet Absolute, Sri Krishna. In an upcoming article, we will discuss the oneness and difference of Lord Vishnu and Lord Shiva.

Calling the God of Love

The High Birth of a Goswami 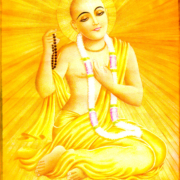