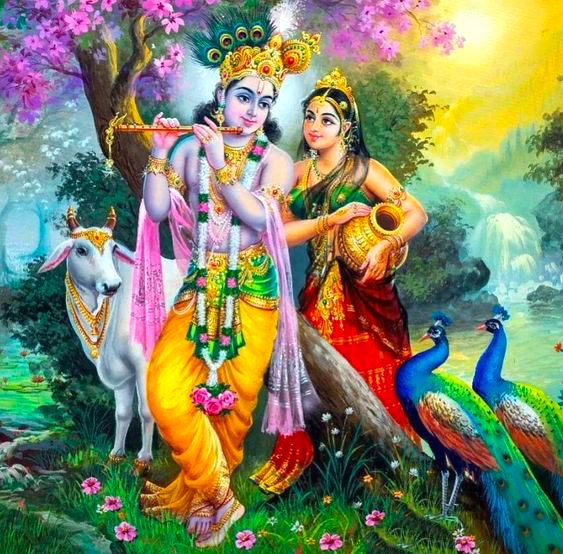 Although Sri Krishna is equal and fair to all, He especially blesses, elevates, and delivers those who follow the laws of dharma, and those who worship Him in devotion. But Krishna is so supremely compassionate that He even helps those who act whimsically and selfishly (adharmically), hurt others, and live without any regard for the laws and rules of shastra.

With fifteen different terms the shastras describe the merciful qualities of Bhagavan Sri Krishna by which He save the jivas trapped in the material world. They include the following:

sarva-bhuta-suhrt: Krishna is the friend of all beings.

parama-udara: Krishna is unlimitedly broad minded and munificent toward all.

sulabha: Krishna is easy to attain if anyone just tries.

gambhira: The depth of Krishna’s mercy is unfathomable.

saumya: Since Krishna is simple and gentle, all can easily approach Him irrespective of their social, mental or physical position.

saulabhya: Although Krishna is infinite Godhead, He becomes intimate with an infinitesimal jiva.

ashrita para tantra: Krishna gives up His independence to be bound by His bhaktas, and live under their shelter in His murti form depending on their seva and maintenance.

mardava: Due the softness of His sweetheart, Krishna cannot bear being separated His beloved parts and parcels, the jivatmas.

vatsalya: Sri Krishna is especially known as “bhakta-vatsala” because Krishna exhibits the greatest amount of “motherly affection” toward His devotee, and the non-devotees in His form as Sri Caitanya Mahaprabhu.

sthairya: Krishna and His representatives act relentlessly to save the deluded ones despite their hopeless attachment to maya.

karunya: Radha mixes Her compassionate heart with Krishna’s to inspire Krishna to save us, gives us bhakti and deliver us to His lotus feet.

madhurya: With His irresistible sweetness, charm, beauty and love Krishna attracts the minds and hearts of the jivas, and fills them with anand, ultimate bliss and satisfaction.

arjava: Krishna is absolutely straight forward and freely gives grace to all without restriction.

sauharda: As a friend to all living entities, Krishna’s heart is melting with desires to help everyone become free suffering.

Shastra describe the jivan-mukta as an enlightened soul who is liberated but still embodied. Although free from all sanchit and kriyman karmas, the enlightened one still experiences the karma that has already begun to fructify called prarabdha-karma. The jivanmukta yogi or devotee does not return to samsar after death.

Why does the liberated one continue to live if all karmas i.e sanchit and kriyaman are destroyed? The liberated soul stays in a particular material body because of the force of the already activated prarabdha karmas related to that physical body.

Consider this analogy. If you turn off the electric fan, it will keep moving even though no electricity is connected to it. Likewise, even though the pure, liberated devotee is not producing any more karma, and all one’s latent residual karmas i.e. sanchit and kriyam are destroyed, the karma already activated for this life i.e. prarabdha has to run its course.

For example, one devotee, due to performing intense bhakti bhajan and receiving the full krpa of Guru and Bhagavan, may become a jivan-mukta, a liberated, karma-free pure devotee, when one is sixty-years old. But still that devotee may live thirty more years, and during that time undergo various physical ailments and diseases due to the already in motion force of the present prarabdha karma. But that liberated one will not feel any suffering due to the purity of mind and heart.

Is Our Bhakti Pure?

Beautiful Truths of Bhagavata 001 “Truth of Guru”
Scroll to top