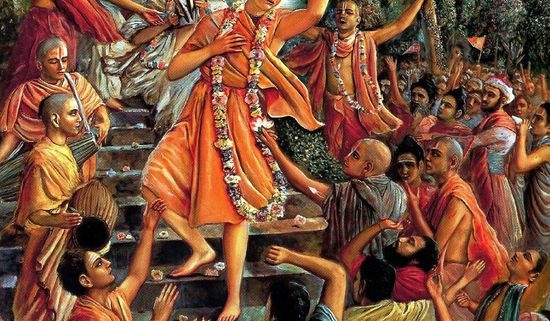 When Mahaprabhu came to Benares, a local Brahmin narrated His transcendental glories to Sri Prakashananda, a famous Advaitin acharya.

The Advaitin then laughed very much (bahuta hasila) and criticized Mahaprabhu: “Yes, I heard He is called Chaitanya. He has hypnotized a bunch of sentimental followers into believing He is Ishvara. And now they dance around like madmen!”

Feeling very much aggrieved to hear this, the Brahmin immediately left and went to describe his meeting: “O Mahaprabhu! Although he offended You that Advaitin said Your name, “Chaitanya Chaitanya Chaitanya”. But why could he not say “KRISHNA?”

“There is no difference between Krishna’s transcendental body and Himself or between His name and Himself. But by nature the jiva’s name, body and soul are all different. (132)

“Therefore, Krishna’s transcendental name, form and intimate pastimes are not perceptible or self-manifest to the material senses. (134)

“Sri Krishna Himself and His name, qualities, and pastimes are all equal in transcendental consciousness and bliss. (135)

“The complete absolute bliss of Krishna’s lila rasa forcibly pulls the jnanis away from brahman bliss of and conquers their souls.”(137) [i.e. Sri Shuka Muni]

These are Sriman Mahaprabhu’s direct and personal teachings on the glories of Sri Krishna’s Divine Names. During His discourse, however, Sri Chaitanya spoke the following two essential verses about Nama Tattva that all devotees should know, memorize and remember while chanting Sri Harinama japa and kirtana.

“The peerless gem of Krishna’s transcendental name fulfills all thoughts and desires. Nama Prabhu is the living form of consciousness and divine loving rapture. Krishna nama is completely immaculate—ever existing on the transcendental plane.”

“Sri Krishna’s transcendental names, forms, qualities and pastimes cannot be perceived by the material senses. However, they all automatically self-manifest [svayam sphurti] on the tongue and other senses of one with a service attitude [seva mukha].” (Caitanya Caritamrita 2.17.114-137) 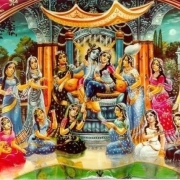 Who is My Guru? part two