The following list of obstacles to Vraja-bhajana comes from Bhaktivinoda Thakura’s ‘Caitanya Siksastakam’ which says, “The demons manifesting in Vraja Gokula on earth have symbolic significance. They are not found in the spiritual world. There they appear only as rumors or impressions.”

The Thakura says, “By reading the namittika (occasional) lilas of killing the twenty demons mentioned in the tenth canto of Srimad Bhagavatam, the sadhaka purifies his heart of all the impediments, obstacles, anarthas and aparadhas. Then one becomes eligible to read, reflect upon and taste the asta-kaliya lilas of Radha Krsna.”

Until one reaches the platform of bhava-bhakti, it is necessary to cultivate devotion by meditating on both the naimittika and asta-kaliya lilas. By reading and remembering the asta-kaliya lilas (Bhavanasara Sangraha, Krsnahnika Kaumudi), one gets a taste of madhura-rasa. By understanding and appreciating the naimittika lilas, a devotee will destroy all the obstacles to tasting the bhakti rasa within Radha Krsna’s eternal pastimes.

With a sincere desire to become purified of all material contaminations, one should read all the above pastimes from the tenth canto of Srimad Bhagavatam. With all humility, one should pray to Krsna and Balarama to remove the impurities personified by the demons whom they had killed.

The demons killed by Krsna in the tenth canto of Srimad Bhagavatam represent anarthas (impurities or obstacles) preventing a devotee from attaining pure love for Radha and Krsna.

These undesirable impurities and demoniac qualities must be completely uprooted from the core of one’s heart. Only cent percent pure devotees of Krsna can live eternally in Vrndavana blissfully serving the Divine Couple.

This is a mystery of Vraja-bhajana. The aspirant must personally remove these strong impediments with his best care and efforts and by obtaining the mercy of Krsna. If the devotee’s humility- becomes very deep and intense, Krsna will be merciful.

In that case, the feeling of Lord Baladeva will arise in his mind and quickly destroy these demoniac qualities. Then one will gradually improve his cultivation of bhajana.

Our View of Vrinda- Devi 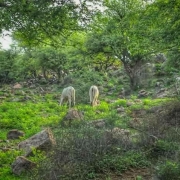