After Mahaprabhu and the other devotees bathed the body of Haridasa Thakura with seawater, they performed all the appropriate rites and rituals. At that time, Mahaprabhu declared, “This ocean has now become a great place of pilgrimage, samudra maha-tirtha.” Sri Jagannathaji’s prasadi silken ropes, sandalwood pulp, food and cloth, were placed on Haridasa’s body. Amidst a kirtana and blissful dancing, Mahaprabhu personally covered the body of Haridasa Thakura with sand while chanting “Hari bol! Hari bol!” Afterwards, Mahaprabhu bathed in the sea with His devotees, swimming and playing in the water in great jubilation, jala-keli range.

Then to celebrate the Tirobhava Mahotsava of Haridasa Thakura, Mahaprabhu went to Ananda Bazaar inside the Jagannatha Mandira to beg maha-prasadam from all the shops. Sri Chaitanyadeva and all the devotees went to Kashi Mishra’s house to honor Jagannatha’s maha. While personally serving the prasadam, Mahaprabhu put on each devotee’s plate what at least five men could eat. At the request of all the devotees Mahaprabhu sat down and everyone began relishing that most amazingly wonderful maha-prasadam.

Insuring that all the devotees would eat up to their necks “vaisnava savadhan, akantha puran”, Mahaprabhu kept telling the distributors, “Give them more! Give them more!” After prasadam, Mahaprabhu lovingly decorated each devotee with a flower garland and sandalwood pulp.

In conclusion, we can see that Haridasa Thakura was not only a topmost devotee and learned scholar (maha-bhagavata, parama-vidvan), but he attained the supreme fortune of passing away before Sri Chaitanya Mahaprabhu. 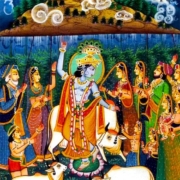 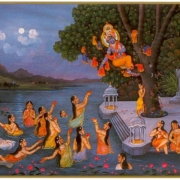