Did you know that not less than 7 siddha dehas are clearly described in the SrimadBhagavatam? Yes, it’s absolutely true—confirmed by the highest authority: the Bhagavata, which is the topmost, perfect shastra pramanam, amala Purana and the Pāramahaṁsa-saṁhitā.

Whether one is a Sri Krishna krpa-patra or a spiritually perfected bhakta sadhaka, he/she WILL ATTAIN a beautiful and divine siddha svarupa or SIDDHA DEHA. By the mercy of Sri Guru and Bhagavan Sri Krishna, the following personalities attained siddha dehas and went eternally to the spiritual sky:

“O Brahmin Vyasa! Giving up all material attachments, I focused my pure mind completely on Sri Krishna and gave up my material body. Instantly, without any time interval at all, I received my spiritual body (siddha deha), like lightning flashing simultaneously with lightning.

“Having been awarded a transcendental body befitting an associate of Bhagavan Sri Vishnu, my material body made of five material elements and my karmas fell away.” (Srimad Bhagavatam 1.6.27-28)

The verse word prayujyamāne means that the siddha deha was personally brought by Bhagavan Sri Vishnu [from Vaikuntha] and given or awarded to Narada Muni at death.

Previously, after once giving His sakshad darshana to the boy sadhaka, Narada Muni, Bhagavan Sri Vishnu disappeared and spoke invisibly from the sky (akashvani), saying, “O Narada, when you give up this body of low birth, you will become My associate.” (SB 1.6.23) Here in verse 28, Sri Vishnu fulfills His promise as Narada Muni simultaneously gives up his material body and receives the spiritual body, siddha deha.

“Hearing the arrangements of Sri Krishna and the proper situation of the Yadu family, without others knowing, Yudhiṣṭhira fixed his mind on attaining Krishna’s abode.” (Srimad Bhagavatam 1.15.32)

Just see the inconceivable and most astonishing compassion of Bhagavan Sri Krishna! A baby-killing, blood-sucking witch came to kill Him, yet Sri Krishna mercifully gave Putana a spiritual body as a nursemaid [dhatri] assistant to Yashodamaya in GolokaVrindavana.

Sri Uddhavji said, “O! The most evil Pūtanā, intent on killing Krishna, offered her poisonous breast to Krishna, yet she attained the position of a nurse in the spiritual world. Who else can be as merciful as Bhagavan Sri Krishna? Thus I surrender to Krishna!” (Srimad Bhagavatam 3.2.23]

Sri Brahmaji said, “The dedicated followers of Bhagavan Sri Vishnu have transcended the rules and regulations (durayama) of yoga meditation and other austerities and even surpassed us. Possessing the most excellent qualities, they cry incessantly due to their intense attraction for Hari-katha and then enter Vaikuntha [which means attaining a siddha deha].” (Srimad Bhagavatam 3.15.25)

Immediately on the spot, by the inconceivable shakti of Sri Vishnu, Balak Dhruva’s human body underwent transfiguration and became a spiritual body in this most amazing chapter of Srimad Bhagavatam.

“Before boarding the transcendental Vaikuntha airplane, Balak Dhruva circumambulated and worshiped it; offered respects to the Vishnu parshads (associates); and assumed a golden form. Then that plane delivered him to Dhruvaloka, an outpost of Vaikuṇṭha within the material atmosphere.” (Srimad Bhagavatam 4.12.29)

After 80 years of grossly sinful life, the Brahmin Ajamila was saved from hell by Bhagavan Sri Vishnu. Then he went to Haridvartirtha to perform intense Vishnu bhakti bhajana. At death, he got a siddha svarupa [siddha deha] and liberation to Vaikuntha.

The Sanskrit word meanings in this verse are crystal clear.

Sva-rūpam; means his own individual spiritual form i.e. the siddha deha or “the siddha svarupa” as Sri RupaGosvami describes it in Bhakti Rasamrita Sindhu.

A couple of boys, a fiendish witch and a fallen papi Brahmin all got the mercy of Sri Krishna and attained spiritual bodies, siddha dehas, in the spiritual realm. Now just observe how the line of divine krpa extends even to beasts, as Sri Vishnu liberates a suffering jungle elephant.

Devotees having material desires also serve Sri Krishna. They desire dharma, kāma, artha and liberation which they get by worshipping Bhagavan Sri Krishna. Besides that, they also receive the most cherished goal of Krishna prema.

The Bhagavata says, “Bhagavan Sri Vishnu certainly gives the objects desired by His devotees. However, He gives them in such a way that the devotee, after enjoying them, will not ask for them again. Even though they don’t desire them, Sri Krishna lovingly gives His lotus feet to such motivated worshipers. (Srimad Bhagavatam 5.19.27)

Bhagavan Sri Vishnu gives the desired material objects, and also gives them a spiritual body as He did with Dhruva and others. Thus Sri Vishnu is unlimitedly merciful.

mmgd: The siddha deha that Gajendra prayed for here was attained in the next chapter of SrimadBhagavatam. This is a very very important point for sadhakas of bhakti. Following Gajendra’s example of intentionally praying to Sri Krishna for a siddha deha, we too should pray to Sri Krishna to kindly and mercifully reveal our personal siddha dehas.

However, unlike Gajendra, who seeing his life about to end in the jaws of the crocodile of death, prayed once at death to attain a siddha deha, sincere sadhakas SHOULD PRAY EVERDAY to Sri Krishna to please reveal their individual and beautiful siddha dehas right here and right now.

Can anyone imagine the tremendous power, beauty and sweetness of bhakti in any form, be it karma/jnanamishra bhakti, shuddha-bhakti or even deceitful devotion masking murderous intents? Disregarding all mixed motives, Bhagavan Sri Vishnu/Krishna kindly purifies His worshipers, humbly fulfills their material desires, and gives them eternal spiritual forms in Vaikuntha even if they aren’t desiring them.

Children, sinful Brahmins, sincere sadhakas, prakrta-bhaktas, murderous witches and even beasts like elephants—all get the mercy and attain the spiritual sky by the infinite, divine compassion of Sri Vishnu/Krishna.

“O Sri Krishna, remembering all these success stories of Srimad Bhagavatam, I too hope one day to receive a drop of Your mercy, the embrace of Your love, and a spiritual form too. Please, O Sri Krishna, please, O please, don’t neglect this one piteously crying in Your divya dhama!” (verses from madan-gopal blogspot)

Why Live In Vraja? 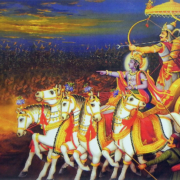 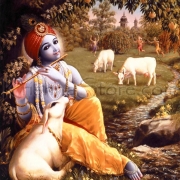 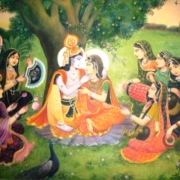