Sri Advaita Prabhu Cries for the Lord of Love

Seeing the decadence of the age, the all-compassionate Advaita Acharya thought, “To help these fallen people and save this wretched world, Bhagavan Sri Krishna Himself must come to the earth!” With this sankalpa, Advaita Prabhu began to worship a Shalagrama form of Sri Krishna with Ganga jal and tulasi leaves along with loving roars, pleading for Lord of Goloka to descend. Advaita Prabhu’s loud calls are the main cause of Sri Krishna Chaitanya’s appearance on earth, caitanyera avatare ei mukhya hetu.” (Chaitanya Caritamrita 1.3.110)

One day while all the devotees were lovingly gazing upon Mahaprabhu, the Golden Lord suddenly began to repeatedly call out, “Nara! Nara!” Not comprehending the meaning of this outburst, the devotees inquired from Lord Gauranga. Mahaprabhu explained, “Advaita Acharya is Nara (short for Narayana, Maha Vishnu). Because of Advaita’s loud calls, I have descended from Goloka to preach the Sri Krishna Harinama Sankirtana, the supreme and sublime dharma for this age of Kali. Not only that, but I will also freely and widely distribute Vraja prema, which is very rarely attained even by the demigods headed by Lord Brahma. Everyone will submerge in the ocean of love except those who are offenders to Vaisnavas, and those people who are intoxicated with their weath, fame, knowledge and high birth.” (Chaitanya Bhagavata Chapter 5)

One day Lord Gauranga discussed this event saying, “It is because of Advaita Prabhu that I came here, for Nara’s (aka Advaita Prabhu) roars rang in My ears. I was lying peacefully in the Milk Ocean, but Nara’s roar woke me up and brought Me down here.” (Chaitanya Bhagavata 3.9.297-8) 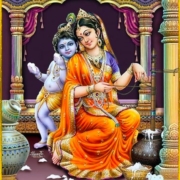 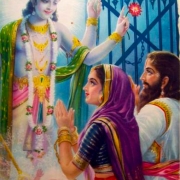 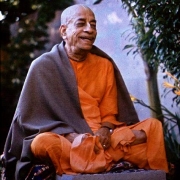 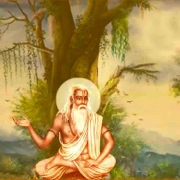 The Truth of Sri Guru
0 replies