In Karttika 1972, in his “eternal residence” at the Radha-Damodara Mandira, Srila Prabhupada had the most amazing conversation full of realizations and Vraja illuminations. Present there at that most auspicious time were his fortunate disciples Shyamasundara, Gurudasa, Hayagriva, and Prabhupada’s gurubhai Dr. O.B.L. Kapoor. We hope all our devoted friends will increase their understanding and love for Radha-Krishna, the Vrajavasis and Sridhama Vrindavana by reading the following entries which we have categorized by topic.

Srila Prabhupada: “The Vrajavasis prefer to die rather than give up their Krishna. Throughout India you’ll find that some of the lower castes—the shudras, or vaishyas, or harijans—will convert to Mohammedanism [Christianity], but in Vrindavana even the shudra will not give up Krishna, not even for all the gold in the world.”

“A devotee knows that this Vrindavana right here is Vrindavana. Even if the people living in Vrindavana do not appear very pious, they are most fortunate because they live in the land of Krishna. Jaya jaya vrindavana-vasi yata jana, all glories to all the inhabitants of Vrindavana! It is not said that only the devotees here are glorified. Everyone! Even the pigs. It is more fortunate to be born in Vrindavana than in a rich or aristocratic family, because in the next life, one will go back to Godhead.”

Srila Prabhupada: “No one born in Vrindavana is ordinary. It may not be very palatable to hear, but those who live in Vrindavana and commit sinful activities take birth as dogs, monkeys, and hogs here. In this way, by eating the dust of Vrindavana, they become purified, liberated.”

Disciple: “Gurudeva, how does one get these different bodies?”

Srila Prabhupada: “If a person in Vrindavana engages in too much sex indulgence, he will get the body of a dog, a monkey, a pigeon, or even the body of a tree. The pig body is there for one who overeats or eats prohibited food.”

Disciple: “Gurudeva, what about those guys down by the Yamuna that smoke ganja all day?”

In a very sweet, humorous way with a slight laugh, Srila Prabhupada replied: “They get hippy bodies with big beards and long hair. And they have to take birth in San Francisco U.S.A.”

Srila Prabhupada “The effect of living in Vrindavana cannot be overestimated. At every turn, you are reminded of Krishna here, and your spiritual strength increases due to that contact. For instance, from ’62 to ’65, I would sit in these rooms and chant Hare Krishna and see the samadhis of Jiva and Rupa Goswamis. Just by thinking of how they wrote, I got courage to write. I would type and cook a little. I lived very simply, content to be in Rupa Goswami’s presence. These samadhis are the best in Gaudiya Vaishnavism. They actually inspired me to go to the West.”

Disciple: “Prabhupada, it appears that the Dhama is deteriorated and unclean.”

Srila Prabhupada: “Vrindavana has not deteriorated! Just see. For a materialist, everything is topsy-turvy because his vision is perverted. Beauty and ugliness are in the eye of the seer. The ugliness that you see here is yoga-maya, Krishna’s covering. Vrindavana appears dirty and deteriorated to drive away the atheists and impersonalists. For a devotee, this Vrindavana is as good as Krishna’s transcendental abode in the spiritual sky, Goloka Vrindavana. But you must have the eyes to see. Vrindavana hides HERSELF from the materialist.

Disciple: Prabhupada, why did you just speak of Vrindavana as a person [ hides herself]?

Srila Prabhupada: “In spiritual consciousness, everything is personal. In Ramayana, we find that even the city of Ravana appeared before Hanuman as a gigantic person, a rakshashi, and Hanuman knocked her down because she challenged him.”

Srila Prabhupada: “Both the pigs and devotees here in Vrindavana are liberated, indiscriminately. Unless one is a devotee in a previous life, he cannot take birth here. He may take a pig’s or dog’s body for a few years, but that’s no impediment. He is simply getting rid of sinful reactions.

Disciple: “Are people in Vrindavana liberated even if they don’t have a bona fide spiritual master?”

Srila Prabhupada: “Yes, because Vrindavan is directly under Krishna’s supervision. Krishna is their spiritual master.”

Living eternally in Vrindavana engaged in the loving personal service of Srimati Radharani is the goal of all Gaudiya Vaisnavas. In our hearts, in our minds and with our lives we all try to live moment by moment in Vrindavana. We meditate on Vrindavana, dream of Vrindavana, and try our best to tell everyone about the sweet glories of Vraja Dhama. Every Gaudiya is a messenger of Vrindavana, carrying the good news of Radha-Govinda’s pure loving service to one and all.

Importance of Sri Radha and Karttika

How Do Mantras Work? 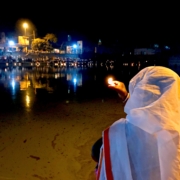