The divine syllable OM has nothing to do with an impersonal conception. The following verses from Gopala-tapani Upanisad clearly establish that OM means the Supreme Personality of Godhead Sri Krishna. “The sound vibration OM denotes the catur-vyuha-tattva of Sankarsana (Sri Balarama), Pradyumna, Aniruddha, and Vasudeva (Sri Krishna). As OM transcends the three qualities of material nature, one should also know oneself to be beyond the identity of the material body: T am the eternal servitor of Krishna.’ This consciousness must be maintained at all times.

Besides supporting Sri Jiva Gosvami’s explanation that OM represents Radha and Krishna, the Gopala-tapani Upanisad further states that the seed of Krishna’s eternal pastimes is inherent in the seed mantra OM. “The enlightened sages declare that the svarupa-sakti of Bhagavan Sri Krishna, Sri Radha, being the prime mula-prakrti, is nondifferent from OM. Gopala Krishna, who is the creator, sustainer, and destroyer of the universe, is also nondifferent from OM.” (GU v. 58)

Acaryas also explain that in the seed word OM which is a combination of three syllables, A-U-M. A—expresses the form of Lord Visnu; U—expresses the form of His consort Sri, the mother and support of the entire world; M—expresses the individual soul, who is the dependent servant of Visnu and Sri and no one else. The sound vibration omkara is the root of Vedic knowledge, and it is known as maha-vakya, or the supreme sound.

In the next article, we will learn about the relation between OM and the Hare Krishna maha-mantra.

O Krishna! I Beg for Your Mercy part three 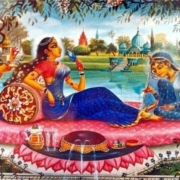 OM MY GOD! Part one

Perfection at Your Fingertips
Scroll to top