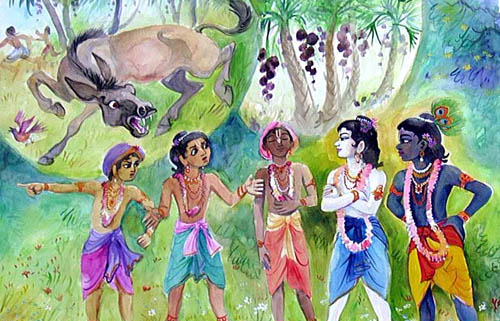 The happiness of Krishna and Balarama increased moment after moment as they played with their friends. One day everyone listened to Krishna narrate the glories of Vrndavana’s trees, creepers, bees, deer, and animals to His elder brother. Due to the hot sun, drops of perspiration appeared on the foreheads of Krishna and Balarama. To relieve Their exhaustion

They rested in the shade of some thick foliage. The cowherd boys, while laughing and speaking sweetly, removed the fatigue of Krishna and Balarama by offering various items. These personal services increased their affection for Krishna more and more.

Sometimes Krishna comforted Balarama by personally massaging His feet and offering other services. Feeling refreshed, Krishna and Balarama ignored the hot sun and played again with the cowherd boys laughing gleefully in great delight. Overcome with merriment, they followed the cows into the forest. Everyone relished a festive mood bathing in the natural aura of Krishna’s sweet love.

With a stream of honey-dipped words, the boys spoke to Krishna, who is generous, attractive, expert in all types of sports, full of matchless strength, and the best among all worthy persons. The cowherd boys said, “O Krishna! O supreme enjoyer and all-powerful one! Please hear us. Our bodies can no longer tolerate the severe hunger we feel.

“Nearby is a forest of tala (palm) trees full of mouth-watering fruits. The sweet aroma of those ripened fruits attracts our minds. Simply shaking the trees will bring all the luscious fruits to the ground. Our desire to have those fruits is very great. If You think it is a good idea, then let us go to that tala forest”

After hearing this, Krishna agreed to satisfy their desires by entering the forest guarded by the evil Dhenuka. While observing the beauty of the forest, Krishna stated His intentions to take the fruits. The branches of the trees bent down from the weight of the ripened, bright orange tala fruits. The tightly packed clusters of fruits appeared like one big fruit.

The fruit trees practically touched the clouds and were beyond the reach of the common people. The fragrance of the tala fruits pleased the entire earth. Being greedy for that fragrance, the wind stole it and made a rustling sound in the leaves of the trees as it ran away. Krishna glanced happily at those trees and gave the command, “Pick the fruits!”

The cowherd boys threw stones at the tala fruits with their restless hands. Dhenuka (a demon in the form of a donkey) exploded with anger upon hearing the loud sound of the falling fruits. Suddenly the sky darkened from a huge dust cloud created by the scratching of Dhenuka’s hooves, and the earth trembled from the stomping of his feet. His deafening roar frightened the demigods. Ignoring the other boys, Dhenuka brayed louder than thunder while attacking Krishna and Balarama.

Before the invincible Lords, Dhenuka looked like a grasshopper jumping into a fire. Intending to kill Them, he charged at Balarama and violently kicked the Lord’s chest with the hooves of his hind legs. With the fingers of His left hand Balarama seized Dhenuka by his hooves and threw him into the top of a palm tree. The demon groaned loudly and died.

Seeing the death of Dhenuka, his fellow ass demons sought revenge for the loss of their close friend. Large numbers of strong donkeys immediately attacked Krishna and Balarama. But the two brothers easily killed them all.

Abundant fruits fell from the trees and piled up on the ground below, which turned muddy from the juice of so many broken fruits. The boys threw the unripe fruits around in play. Knowing the rules of purity, they did not touch the fruits contaminated by the blood of the demons. Just smelling the strong fragrance of the tala fruits satisfied them.

Krishna, Balarama, and the cowherd boys collected the cows while admiring the stout trees of the forest. Noticing the arrival of afternoon, Krishna made His way back to Vrndavana. Krishna, the crest jewel of lovers, performed human-like feats while playing His flute and wandering on the bank of the Manasi Ganga.

The pleasant evening breeze carried the clouds of dust raised by the hooves of the cows returning to Vrndavana. The dust appeared to kiss the cowherd boys as it slowly sprinkled down on their hair and turbans. The Vraja gopis, watching intently from the rooftops, lost their minds upon hearing the melodious sound of Krishna’s flute and seeing His delightful face. Conveying His secret attachment, Krishna glanced lovingly toward them with His lotus petal eyes before entering His house.

When Krishna and Balarama arrived, Yasoda and Rohini enthusiastically cleansed the dust from Their bodies, washed and rubbed Them with oil, and bathed Them. After dressing and ornamenting the two brothers, they fed them and laid Them to rest. By nature Krishna is an unfathomable ocean of sweetness, and the best among all qualified persons. His beauty illuminates the whole universe, and dispels the lamentation from the hearts of His obedient followers. 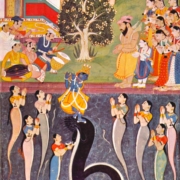 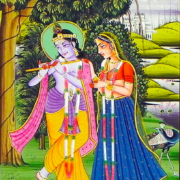 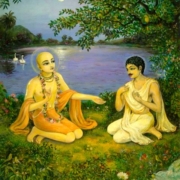 What is a Gaudiya Vaisnava? 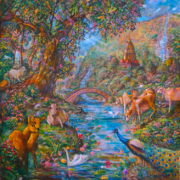 The Glories of Govardhana 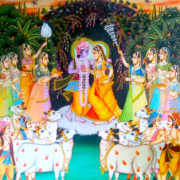 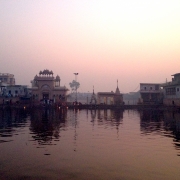