Receiving the Hare Krishna Maha Mantra from a teacher is not called diksha; it is an expression of acceptance, care and compassion.

According to the Veda shruti, Sri Sanatana Goswami, Sri Jiva Goswamipada and all Gaudiya Vaisnava acharyas diksha means to receive the Krishna mantra (aka Gopala Mantra) from the spiritual master. Only this is diksha. Although it’s commonly thought that receiving harinama is diksha, it is not according to shastras, tradition and the teachings of Sri Chaitanya Mahaprabhu.

To teach the example for everyone, Bhagavan Sri Rama, Sri Krishna, Chaitanya Mahaprabhu, the Panca Tattva and all Gaudiya Vaisnavas have taken diksha which means atma samarpana or surrender to Sri Guru, and hearing three times in the right ear the Gopala/Krishna mantra from Sri Guru.

The confusion arises because the terms nama and mantra are often mixed up and translated incorrectly. Mantra is called nama and nama is called mantra. But Nama DOES NOT MEAN MANTRA. Nama means names of Krishna i.e. the maha-mantra. Although called a mantra, it is actually a chant of divine names which is why it’s in the EIGHTH or vocative CASE, the vocative form of calling out to Bhagavan—“O Hare, O Radha, divine energy of Sri Krishna. O Krishna, please save me!”

The word mantra, however, refers to a collection of transcendental sounds in the FOURTH or dative CASE which by definition must contain a bija mantra (om, klim, srim, aim); and a verb (svaha, namah, vidmahe, dhimahi, prachodayat). In the following verse, Sri Chaitanya Mahaprabhu clearly explains that the DIKSHA MANTRA is different than Krishna’s Divine Name, nama.

Real, proper and traditional diksha means a process of spiritual initiation through which the guru imparts the Vaisnava diksha mantra i.e. Krsna/Gopal Mantra and Kama Gayatri for Gaudiyas. By chanting the diksha mantras a disciple will obtain all transcendental knowledge and attain the association of Radha-Krishna. Unlike mantra, nama requires no diksha, tapa, vairagya or purascharana. Sri Chaitanya Mahaprabhu Himself said, “Harinama is not diksha and does not require diksha. It stands alone and has its own purpose and function.

“Chanting Krishna nama IS NOT DIKSHA. One need not perform purascharya -vrata, or observe any rules and regulations. Just a touch of Krishna nama with the tongue is sufficient to deliver everyone one, even a dog eater.” (Caitanya Caritamrita 2.15.108)

Srila Prabhupada tika: Quoting Hari Bhakti Vilasa (2.6), Srila Prabhupada says, “If one has no diksha then ALL HIS ACTIONS ARE USELESS (sarvam nir arthakam), and one attains birth as an animal (pashu yonim avapnoti diksha virahito jana).” And further (2.10), “It is the duty of every human to take Vaisnava mantra diksha i.e. Gopala/Krishna mantra from Sri Guru.”

As far as the maha-mantra, Srila Prabhupada said, “The chanting of the holy name does not depend on the initiation process.” (Caitanya Caritamrita 2.15.108)

Diksha mantras act invisibly but powerfully within the disciple to clear and remove all previous bad tendencies and commitments to illusion. One begins a new life awakened in divine knowledge. By giving diksha, Sri Guru mercifully slackens the bondage of maya, infuses transcendental energy into the disciple’s heart via the mantra, and awakens an awareness of one’s eternal relationship with Sri Hari.

Contained within the diksha mantra i.e. the Gopala mantra alone is divya-jnana, transcendental knowledge which acts to purify one’s consciousness and reveal the form and identity of Bhagavan Sri Krishna (bhagavat-svarupa) along with knowledge of the sadhaka’s particular relationship with Bhagavan Sri Krishna (sambandha-jnana) and one’s eternal spiritual form i.e. siddha deha.

What special power and wisdom does the most wonderful Gopala/Krishna mantra contain? Sri Jiva Goswamipada answers:

In summary, this is the power, beauty and extraordinary effect of Gaudiya Vaisnava diksha which DOES NOT mean receiving harinama from a preceptor. Through the medium of the Gopala-mantra (Krishna-mantra), Sri Guru dispels the jiva’s aversion toward Krishna, and inspires and directs the disciple to serve Sri Krishna with love. Gradually, the surrendered disciple attains divine wisdom about Sri Krishna, the jiva and the material energy. This powerful wisdom in turn then completely destroys the disciple’s sins and ignorance.

Believe it or not, we have met many mature devotees who only have harimana and NO DIKSHA, even after ten years of sincere service to Sri Guru. This is most regrettable and unfortunate. It is seen everywhere that most Gaudiya Vaisnava Gurus GIVE DIKSHA within 1-4 years of knowing the candidate.

Disciple means surrender and Guru means diksha. This is the transcendental exchange between sad shisya and sad Guru. Simple logic: no surrender—no disciple; no diksha—no Guru. Giving diksha is the duty of Guru and receiving it is the right of the disciple.

So we deeply pray to our most beloved, sweet and dear Srimati Radhika and Giridhari-Shyam to bless all my friends known and unknown with the great treasure of Gaudiya Vaisnava diksha which means receiving the beautiful Gopala mantra, and sometimes getting the most enchanting and esoteric Kama Gayatri. 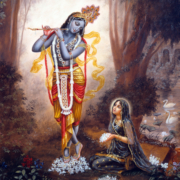