You could say he was “the father of Vraja Yatras and Rasa-lila performances”. Narayana Bhatta Goswami was Brahmin born in South India. Later he came to Vraja and took initiation from Krishna das brahmacari, a disciple of Shri Gopal Bhatta Goswami. He assisted Rupa and Sanatana Goswami in unearthing lost deities and in revealing lila places of Radha and Krishna in Vrindavana.

He wrote over 50 bhakti-granthas and lived several years in Radha Kunda. His famous Vraja Mandala parikrama guide titled Vraja Bhakti Vilasa (completed 1552 A.D.) says he discovered 333 forests and holy places of Sri Krishna. He gave a distinctive name to every kunja, kunda and village in Vraja according to the particular Krishna lila occurring there.

After determining the exact boundary of Vraja, Bhattaji established the practice of circumambulating Vrindavana, which is known today as Vraja Yatra or Caurasi Kosh Parikrama. He discovered places connected with Krishna’s rasa, and constructed rasa-mandalas in those places i.e. Radha Kunda, Unchagrama, Kokilavana, Prema-sarovara, Gahavaravana, Prema-sarovara, Vrindavana, Karahela, Pisai and Parasauli. He also started rasa-lila drama performances around Vraja, which are still popular today with visitors and Vrajavasis.

After living many years in Radha Kunda, he moved to Uncagrama, where he married and later entered samadhi on Vamana Jayanti 1643. 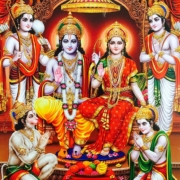