You will be surprised to know that way back in 1969, Srila Prabhupada glorified the hearing of rasa lila, and even encouraged it in the right circumstances. His Divine Grace even went so far as to say that conditioned souls, which means everyone on this planet, “SHOULD HEAR THE RASA LILA.” Please do the needful after deeply reflecting on the following statements Srila Prabhupada made in his krishna Book printed in 1969.

“One who actually hears the rasa-lila will become completely freed from the lusty desire of sex life.

“The conditioned soul should hear the rasa-lila dance from an authorized spiritual master, who is in the disciplic succession, and is always engaged in Krishna consciousness. When a person hears the rasa-lila in this way, the effect will be sure: he will be elevated to the highest position of spiritual life.” (Krishna Book, Srila Prabhupada)

In the 1970’s, Srila Prabhupada’s disciples made sure that every day no matter what happened, they would read the Krishna Book without fail. May those days come again. And may all my friends dive deep into the ocean of pure spiritual nectar called Krishna Book. 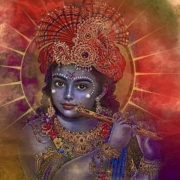 How to Chant Mantras? - Part three

The Devotee is More Merciful than God
Scroll to top