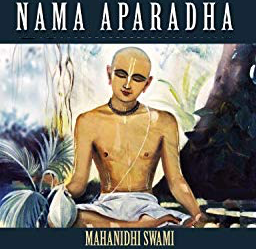 Everyone! Please be careful not to offend Sri Krishna’s most merciful and powerful, sweet, ever-present loving form as the Hare Krishna maha-mantra.

If a sadhaka is experiencing any of the following effects, it means one is committing offences to Sri Krishna Nama:

As a result of Nama aparadhas, one’s bhakti bhajan wanes and one again becomes absorbed in sense gratification—maya! One thinks excessively about one’s own bodily happiness and distress and that of others.

When one offends Sri Nama Prabhu, one starts feeling proud of his/her devotional service and activities. This in turn generates other offenses i.e. disrespecting Vaisnavas. As they say, “pride precedes a fall.”

To close, we offer a poem in praise of Krishna Nama:

The name puts you in a new frame, beyond the game of name and fame. Your mind the name will tame. You’ll never be the same as your old claim goes aflame. The Name will set your aim, and take you to Vraja dhama for more and more Nama!”

Do We Have Free Will?
Scroll to top