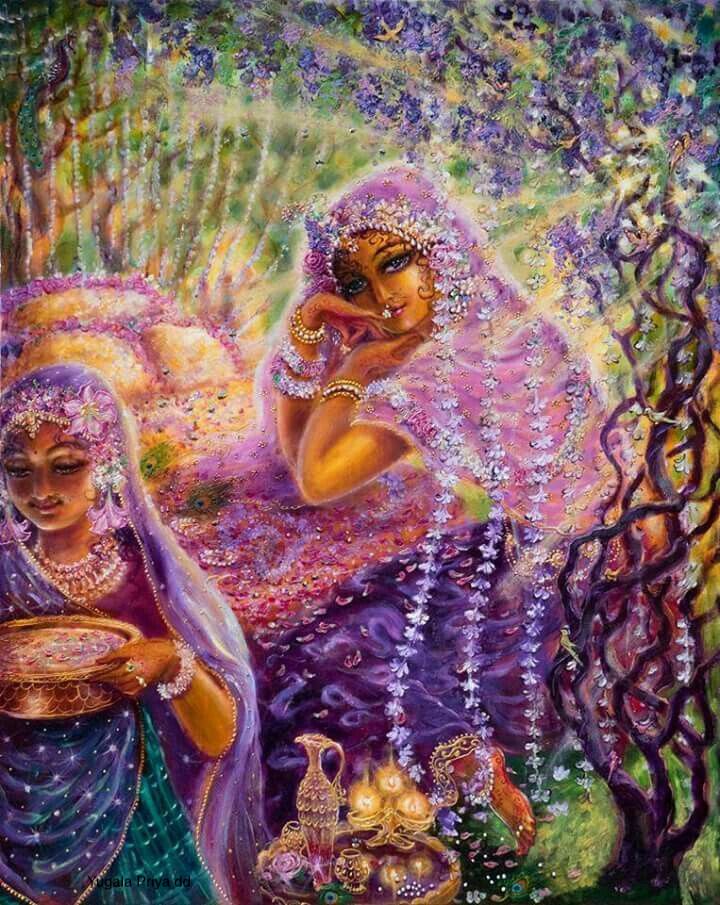 In 6 verses (Bhakti-rasamrta-sindhu 1.2.291-296), Sri Rupa Goswamipada teaches the main principles and practices of raganuga-bhakti. After learning these at the feet of my teacher, we wrote this article about cultivating manjari/gopi bhava as a handmaiden, dasi manjari of Srimati Radharani.

A raganuga sadhaka pursuing the madhurya-rati of Sri Krishna’s ragatmika devotees in Vrndavana will mainly concentrate on the different sevas and feelings of a few manjaris. The supreme goal of a sadhaka manjari is the happiness and pleasure of Sri Radha, and Her beloved Sri Krishna.

Gaudiya Vaisnava sastra mention over 150 different sevas of the manjaris. The sadhaka will read about the different sevas performed by the manjaris Sri Rupa, Tulasi (Raghunatha Dasa Goswami), Vinoda-vallari (Visvanatha Cakravarti), and Campaka (Sri Narottama Dasa Thakura), and as described in Radha Rasa Sudhanidhi. While meditating on Radha-Krishna’s eternal Vraja-lilas, the raganuga sadhaka will think, “I am serving, assisting, and helping Radharani along with these manjaris and my Guru sakhi manjari.”

The sadhaka can also think, “I am meditating on all these different sevas. But sometimes I am all alone with Sri Radha or with others. I am taking the lead and personally doing all these wonderful sevas for Radhika’s pleasure throughout the day and night (asta-kaliya-lila).”

While reading about the sevas and interactions of the four manjaris mentioned about, I will observe and relish their feelings and intimate loving exchanges with Radhika, Krishna and one another. I will personally identify with those feelings as being my own, or at least what I am aspiring to attain.

Being Radha’s kinkari or loving manjari, I possess tad-tad bhavecchatmika bhava or devotion. This means I only desire to identify with, nourish, and experience the quality but never the quantity of the ecstatic feelings i.e. bhava that Sri Radhika relishes within Her heart during Her intimacies with Syama. I share Radha’s feelings but not Her enjoyment.

As Radha’s confidential manjari, I am also bhava-tadatmya, which means I am one in feelings and thoughts with Radhika. Radha is in my heart and I am in Hers. This is my natural svabhava, the very way I am. Whatever Radha feels produces the thoughts of what Radha needs, which immediately manifest in my mind as I carefully focus at every moment on perfectly serving and pleasing my Pranesvari Sri Radha. Thus Radha never has to tell me what to do because I already know.

Radha’s anxieties and needs are all that matters to me, and not the bliss and incredible transcendental ecstasy that automatically arises by attending to Swamini. Radha is the sole mistress of my life. I am totally made of service. I exist only to serve and please Radha throughout the day. Radha’s joy is my joy—Radha’s distress is my distress.

In the siddha-pranali system, the Guru privately tells a qualified disciple the 11 aspects of his siddha deha known as ekadasa-bhava, which include the disciple’s eternal spiritual name in Krishna lila, age, dress, seva, kunja, mood, sakhi group leader like Laltia or Visakha, and so on. As learned from his own Guru, Sri Guru then teaches the disciple the same method to realize his/her eternal spiritual identity, siddha deha.