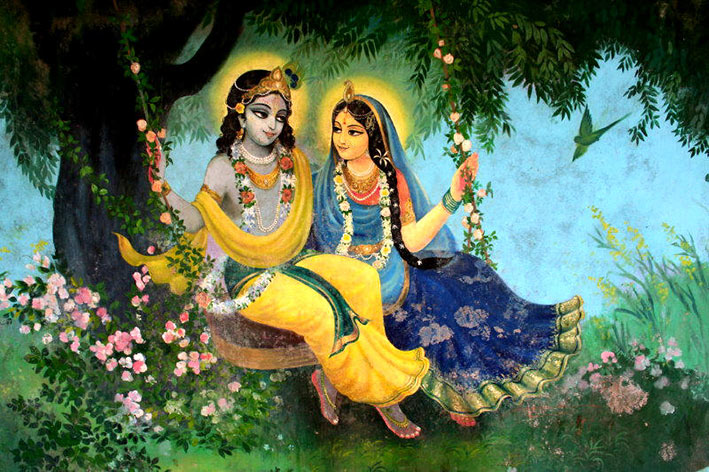 It’s true that both in quality and quantity, Bhagavan Sri Krishna is infinitely SAT CHIT AND ANANDA, which means Sri Krishna has a beautiful spiritual form made of eternity, all-pervading unlimited consciousness, and infinite transcendental, ecstatic loving bliss.

Although many think and speak, “The jivatmas or jivas (human beings like us) are like Sri Krishna, sac cid ananda, one with Krishna in quality but not in quantity. Thus Krishna is the big sat chit ananda, and we are a small edition, “chota sat chit ananda”.

This is completely INCORRECT due to a misunderstanding of the word ANAND, which is often used when describing the jivatama. According to Upanisads, Srimad Bhagavatam, Puranas and the Vrndavana Six Goswamis the eternal constitution, nature, or composition of the jivatma is only SAT and CHIT, eternality and consciousness. In other words, “I am eternal and I am aware of my existence.” [Sri Gita 2.20]

Now we give a brief summary of the sastras and Sri Jiva Goswamipada’s definition of the inherent nature of the jivatma.

To begin with, Sri Jiva Goswamipada says that understanding the true identity and nature of the jiva is the first step in the science of God-realization. (Tattva San. Anu. 53)

The material happiness we jivatmas feel through our senses, bodies or minds has absolutely nothing to do with the transcendental ananda that is part of Sri Krishna’s being.

As said earlier, the confusion about the true identity of the jivatma arises from the misunderstanding and misapplication of the word ANANDA. It is just like the word ATMA, which sastra uses interchangeably to mean either SOUL, MIND OR BODY.

A second example is the word KAMA, which, depending on the context, can mean either base, material desire or physical LUST i.e. intense craving to satisfy one’s selfish carnal instincts.

Or in spiritual matters KAMA refers to the cent per cent, absolutely pure spiritual desire, and intense transcendental amorous passion of the Vraja gopis like Srimati Radharani to please and satisfy Sri Krishna in every possible way, without a pinch, fragrance or even one iota of selfish desires “for me”.

Similarly, the word ANANDA is used to describe the material happiness of the jiva as in “Are you feeling anand?” Such material ananda, which is merely a play of polarity or the removal of a distress or lacking, should never be confused or equated with the totally transcendental eternal ANANDA of Bhagavan Sri Krishna.

It is only if and when the jivatma receives Krishna’s transcendental chit shakti in the form of bhakti by the grace Bhagavan or Sri Guru that spiritual bliss i.e. TRUE AND REAL ANANDA, and transcendental knowledge CHIT are infused and mixed in the inherent nature of the transcendental jivatma.

Thus all Krishna bhaktas should understand, appreciate and be forever grateful to Sri Krishna and Sri Guru for Their giving the matchless gift of pure bhakti. By the mercy of bhakti, all devotees can now know and understand Sri Krishna, reality the beautiful.

And they can NOW TRULY LOVE and experience unending real spiritual joy and fulfillment in the service of Sri Sri Radha-Krishna in the pleasure bowers of Vraja for time eternal!