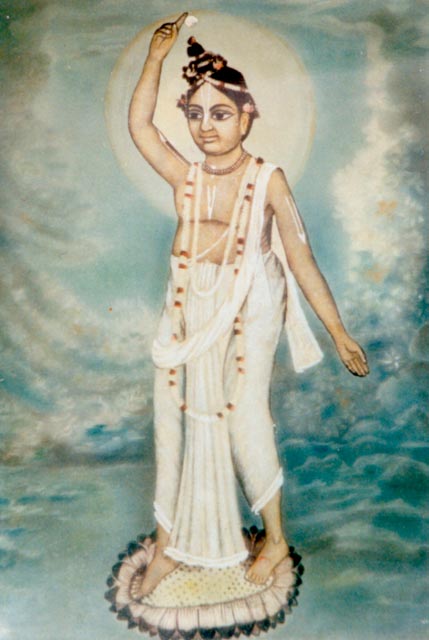 Sometimes people challenge devotees in the Advaita Parivar saying: “Since Gaura-ganoddesa dipika identifies Advaita Prabhu only as Maha-Visnu, how can He or His guru parampara give madhurya rasa?”

“It is clearly said in that book that Nityananda Prabhu is Balarama and also Ananga-manjari, the younger sister of Sri Radha. So in the form of Ananga-manjari, Nitai can give madhurya-rasa. But what about Advaita Prabhu?”

Before directly answering this question, everyone should understand that all the eternal associates of Caitanya Mahaprabhu have spiritual forms (siddha svarupas) in Vraja madhurya rasa. And all the traditional lines, parivars, i.e. Nityananda, Advaita, Gadadhara, etc. coming from Mahaprabhu can and do bestow gopi-prema and manjari bhava. Outwardly, they may be famous for another rasa, but Gaurahari’s companions also have a position and seva in gopi-bhava.

After Rupa Goswami recited his dramas Lalita/Vidagdha, Mahaprabhu asked Nityananda and Advaita Prabhu to embrace and bless him with gopi bhava, advaita nityananda adi sab bhaktagan, krpa kori rupe sobe koila alingan.” Caitanya Caritamrita 3.1.207). It is only because Nitai and Advaita possess the power of gopi-bhava within them, that Mahaprabhu asked them to give it to Rupa Goswami, who then became the rasa-acharya of gopi-bhava for the Gaudiya Sampradaya.

Now back to the post’s opening paragraph, citing Gaura-ganoddesa Dipika’s challenge to Advaita Prabhu’s qualification to give Vraja madhurya-rasa.

Kavi Karnapura’s book, Gaura Ganoddesa Dipika is only one of many authentic and old books revealing the eternal Vraja names and divine forms of various associates of Sri Caitanya Mahaprabhu.

The true or complete identities of many other eternal associates of Mahaprabhu are also not clear or accurately presented in Gaura-ganoddesa dipika. The proof is that at least 25 times in his book, Kavi Karnapur uses the word ukta or uchu, which mean, “it is said” or “some people say” when he is not sure about the actual Vraja name or identity of a particular Gauranga associate. In fact, in one verse Kavi Karnapura says, “My father, Sivananda Sena says he is this person, but I think he is someone else.”

The same Kavi Karnapur, who says Advaita is Maha-Visnu, identifies Raghunatha Das as Rati Manjari. But throughout the Govinda-lilamrta, Krishna Das Kaviraja, who lived directly beside Dasa Goswami for 40 years in Radha-kunda, says he is Tulasi Manjari. He does not mention anything about him being Rati-manjari.

If Advaita Acarya is merely Maha-Visnu, and not a Vraja gopi too, then how could Raghunatha Dasa Goswami, a disciple of Advaita’s disciple Sri Yadunandana Acarya, become famous, worshipable and followed by all Gaudiyas as the par excellent acarya for gopi-bhava and manjari-bhava sadhana?

The exact Vraja identities of various Gaura-lila associates of Sriman Mahaprabhu is an extremely esoteric subject clearly known only to direct members of a particular parivar and not to outsiders. The Vraja names and forms of Gauranga’s eternal associates are passed down privately from Guru to disciple through each individual spiritual family, parivar.

Yes, Sri Advaita Prabhu is Maha-Visnu. But He is also Yogamaya or Paurnamasi, who arranges all of Krishna’s Vraja madhurya-lilas with Sri Radha and the sakhi/manjaris. This is true because the same book, Gaura-ganoddesa dipika, says that Advaita Prabhu’s direct female sakti expansion and eternal companion in conjugal love is the divine Sri Sita-devi, who is non-different from Him, is also known as Yogamaya or Bhagavati Paurnamasi in Vraja.

Like Bhagavan Sri Krishna, all the Visnu-tattva forms of Bhagavan i.e. as Maha-Visnu can expand into unlimited numbers of spiritual forms, each having a unique transcendental name, form and identity to lovingly serve either Sri Caitanydeva in Navadvipa or Radha-Govinda Yugala in Vrndavana.

Thus, Sri Advaita Prabhu is not only Maha-Visnu, but He is also Paurnamasi in Vraja. He also has other spiritual Vraja forms as a sakha, sakhi and a manjari! These secret gems of sweet truths are not shown to outsiders.

They are the private treasures of the parivar, only revealed to those fortunate souls who have surrendered to the sweet lotus feet of Sri Advaita Prabhu, and taken diksa in His most glorious transcendental family or parivar. (sastra courtesy: Sri Advaita Dasji Maharaja)